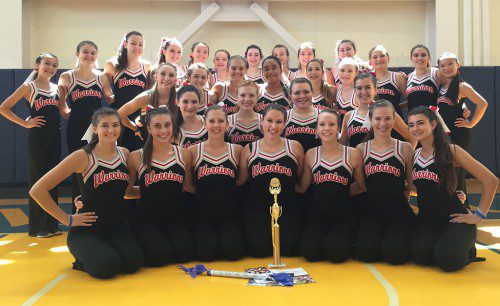 THE WMHS dance team shined at the UDA Camp which was held recently at Emmanuel College.

At camp each dancer learned three routines over the course of three days as well as attended team and individual technique classes. During the last day of camp they performed in an evaluation. Their hard work and dedication paid off and it showed at evaluation time.

The team received an UDA Full Out Award for its own original choreography changes and formations in its Team Routine.

These accomplishments have earned them a bid to compete in UDA’s National High School Dance Competition as well as perform at the Capital One Bowl.

Each year at UDA camps around the country, dancers have an opportunity to learn additional choreography to be evaluated on and then possibly be awarded the All American Award. This award earns them not only the special recognition but also the opportunity to perform in the New Year’s Eve Parade in London.

As their coach, Candice Spencer is proud to announce that this year Wakefield has three All Americans on its team. They are Alexis Christie, Julia Desrocher and Kylie Dubé.

Spencer is very proud of the team and said that it is an honor to coach such a remarkable group of talented young women. Come see them perform at the upcoming Warrior football games in the fall.