WMHS track teams have a good showing at Nationals 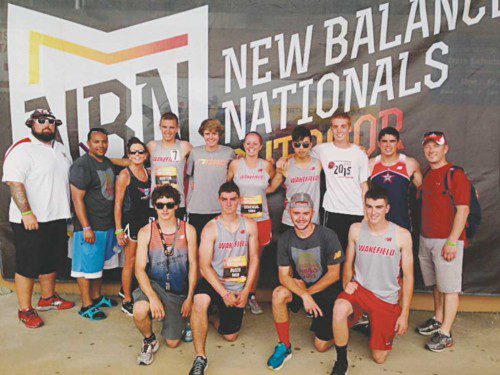 GREENSBORO, N.C. — The Warrior outdoor track teams extended their seasons by two more weeks and competed at the New Balance National track and 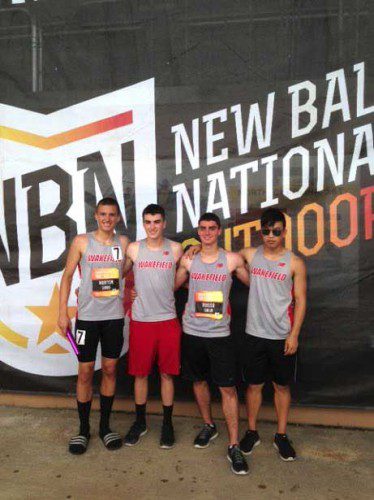 THE 4×200 relay team set a WMHS record with a time of 1:32.94 at the New Balance Track and Field Nationals. From left to right are Joe Hurton, Cam Yasi, Kevin Russo and Eric Chi.

Wakefield was very fortunate to bring nine athletes to compete in the great meet.

In the 4×800 relay, senior Jackson Gallagher, sophomore Adam Roberto, junior Alec Rodgers and senior Ian Ritchie ran a time of 8:08.45. They were fifth in their heat and 24th overall. Ritchie ran a 1:55 split, which would have surpassed his current school record if he had run an open 800 meters.

In the 4×200 relay, junior Eric Chi, junior Kevin Russo, senior Cam Yasi and senior Joe Hurton ran a school record time of 1:32.94. They were second in their heat and were 20th overall.

“I am really proud of our athletes and coaches because to be competing this late in the year takes hard work, dedication and commitment,” said Head Coach Ruben Reinoso. “Bobby Knight was quoted as saying, ‘The key is not the will to win, everybody has that. It is the will to prepare to win that is important.’ I feel that this quote sums up our season. We were so wrapped up around making practice perfect that the meets just seemed an extension of practice. We were successful this year because we practiced hard and winning was just a by-product of how we practiced.”

Reinoso reflected on some of the things that the boys accomplished.

“Our goal every year is to get better and I think our performance speaks for itself. I want to thank my seniors for being such a great class, my captains for doing everything that the coaching staff has asked of them, the underclassmen for doing all the necessary things to make our team successful and believing in the program and finally my coaching staff for being best staff in the state. It is no secret that we have been successful because we have great talent on both sides, the athletes and my staff. Every single one of them has done so much for our program, Perry Pappas (distance), Justin Berry (throws and strength/conditioning), Elias Reinoso (hurdles and horizontal jumps) Anthony LaFratta (sprints and relays), Gregg Gibbs (sprints and strength/conditioning) and Ryan Yurchick (javelin).”

In addition to the Warrior boys, one female from the girls’ track team competed in the meet as well.

Junior Julia Derendal competed in the javelin and she finished 30th with a throw of 90-0.  She fouled on her first two throws which were in the 115-120 range and had to be really cautious with her third throw.

“It was such a wonderful season for her,” said Head Coach Karen Barrett. “The experience of getting to compete at the Nationals was amazing. She will be training this summer to compete at The Bay State games at Tufts in July.”