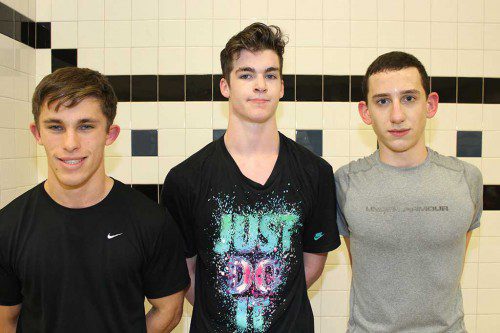 The Black and Gold concluded the 2015-2016 season with a 16–9–1 overall record. The grapplers have a strong core of returning wrestlers and a number of promising newcomers taking the mat this winter.

“We graduated five seniors, Zack Monzione, Michael Reardon, Max Whyman, Kai Jean-Simon and Devin Leggett, whose production will be difficult to replace,” said Black and Gold head coach Craig Stone. “However, we are returning 11 wrestlers with varsity experience and have nine new freshman with a lot of potential. We should have a very positive dual meet season and we have some very talented wrestlers who will do well in the post-season tournament.”

The Black and Gold will be led this season by senior captains Joe Reardon (132 lbs.), Adam Rossetti (138 lbs.) and Connor Stead (145 lbs.). All three captains hail from North Reading.

“They each wrestle with great intensity and have tremendous motivation,” said Stone. “Their example has inspired their teammates in the practice room as well as during matches. They are excellent role models and are keys to our team chemistry.”

“Our captains and seniors will lead by example on and off the mat,” said Stone.

“They all have athletic ability,” said Stone.

Stone said the Black and Gold’s biggest strengths this season are “balance and team chemistry.” He noted the grapplers’ mantra this season is the acronym TEAM (together each achieves more).

“We will not be relying on a core of individuals,” said Stone. “We can cover all 14 weights and there is a team spirit you can visibly see during practice and matches.”

While the Black and Gold has a strong mix of returners and newcomers, Stone said the grapplers need to continue working on “skills, physical conditioning and staying healthy.”

“Many of our weights have only one wrestler in them,” said Stone. “Injuries and illnesses could play a role during the season if we have to forfeit weight classes.”

When asked if the Black and Gold will be in contention for the Cape Ann League title and will be successful in state meets once again, Stone said, “time will tell.”

“Weight classes and individual match-ups can swing a meet one way or the other,” said Stone. “At the state level, we are in our second year of being in Division II, which was a contingency the MIAA regulated if our co-op was to stay together. However, we will have individuals that will do very well at that level.”

The Black and Gold opened the 2016–2017 season with victories over Hopkinton and Wilmington Dec. 10.

The grapplers defeated Hopkinton 42–22 during the tri-meet.

“LNR led from start to finish, with captains Joe Reardon, Rossetti and Stead leading the way with pins,” said Stone. “DiPietro had the most exciting match, winning it with a takedown in overtime.”

The Black and Gold pounded Wilmington 46–15.