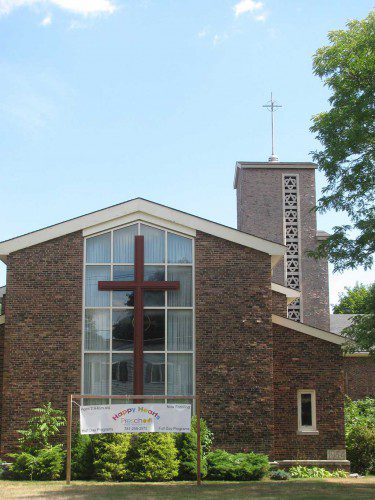 A NEW STEEPLE will be placed atop the tower of the Wakefield-Lynnfield United Methodist Church to house Verizon Wireless antennas, after the Zoning Board of Appeals approved the project last week. The total height will be 87 feet. (Mark Sardella Photo)

WAKEFIELD — If you were wondering what happened to those plans by the Wakefield-Lynnfield United Methodist Church to attach a new steeple/cell tower to the church, well, it’s coming. It just won’t be as tall as originally planned.

Two years ago, the Zoning Board of Appeals approved the Special Permit application of Bell Atlantic Mobile/Verizon Wireless to construct a 124-foot steeple on the church that would house wireless communications antennas. The approval came despite vocal opposition for some neighbors, mostly objecting to the height.

Wireless companies often look to place their antennas in church steeples due to their height and the ability to conceal the equipment in residential neighborhoods. The lease arrangements also turn out to be a financial blessing to the houses of worship.

Last week, Attorney Chris Swiniarski, representing Verizon Wireless, told the ZBA that in the course of preparing for construction it was determined that the existing structure would not be able to support the original design.

“What we’re trying to do is reduce the size of what was previously approved,” Swiniarski told the board. He said that Verizon was seeking a modification of the Board’s Aug. 22, 2014 Special Permit decision that would allow them to erect a much smaller 87-foot steeple.

Acknowledging that height was an issue in the original design, Swiniarski suggested that the new plan would be “more palatable” that the 124-foot steeple.

He said that due to improvements in technology, there would no longer be any need for the air conditioning condenser units next to the church that the original design called for. That equipment and the potential noise coming from them was another concern of neighbors. He did note that a back-up gas generator shown on the original plans will remain as part of the new design.

Swiniarski provided the Board with photo simulations showing what the newly proposed steeple would look like.

“One thing that is for certain,” he said. “The overall bulk is reduced.”

In response to a question from the Board, Swiniarski said that abutters were notified of last week’s hearing on the request to modify the plans. No one from the neighborhood attended or spoke when the hearing was opened to the public.

Swiniarski explained the steeple would be made of a fiberglass composite that allows wireless frequencies to penetrate through. The two antenna units would be located inside the steeple, he said, right under a small dome at the top. One of the antennas would be at 80 feet and the other at 77 feet. There would be space available lower down in the steeple that could accommodate future additional wireless carriers’ antennas.

A crane will be used to put the new steeple in place, Swiniarski said, and construction should only take a few days once the crane is brought in.

The ZBA approved the requested modification of the Special Permit allowing the new steeple/wireless antenna installation.

Swiniarski said that construction could take place as soon as this fall, but more likely would happen in the spring of 2017.