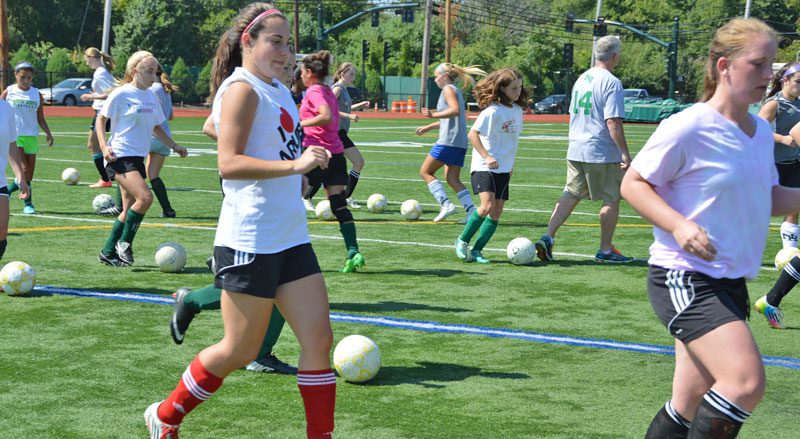 Coach Killeen last coached the Lady Hornets in 2006 when he led them to the Division 3 North quarterfinals. He is thrilled to be back. “Some people like to collect stamps, I love to coach. I think coaching my children’s teams really created the interest to get back involved. I’m very excited; exhausted, but excited. There is a great energy to the program and the players are working very hard to prepare for the season opener on September 4.” The team travels to Newburyport today for the opener.

After graduating nine seniors from last season the Hornets are relatively young. With Marina Govostes and Kristina Copelas lost to season-ending injuries they will depend on their captains for leadership. They will be led by their senior tri-captains Kerri-Ann Donovan, Victoria Brown and Cole Godzinski and senior Payton Conway-Baker.

Last season Donovan was All-League and is will be counted on to provide solid defense at the back along with sophomores Jessica Muise and Giana Moscaritolo.

“In the midfield, we have strength in numbers with Godzinski, junior Jordan Schille, junior Katie Welch and playmakers Tori Brown and junior Jillian Comeau,” Killeen said, adding, “The success of the transition will impact our high quality scoring chances. Many different players will have opportunities to finish, including senior Payton Conway-Baker and sophomore Katerina Hassapis.”

They will need to use their returning talent to navigate through the always tough Cape Ann League. According to Killeen, “I still believe the CAL is one of the strongest soccer leagues in the state. Perennial powers like Newburyport, Masconomet, Hamilton-Wenham and rival Lynnfield are favored to challenge for the CAL titles, but we will be ready to compete with all teams in the CAL.”

The Hornets will look to have a strong season and return to the state tournament for the first time since 2006 under the helm of Killeen.