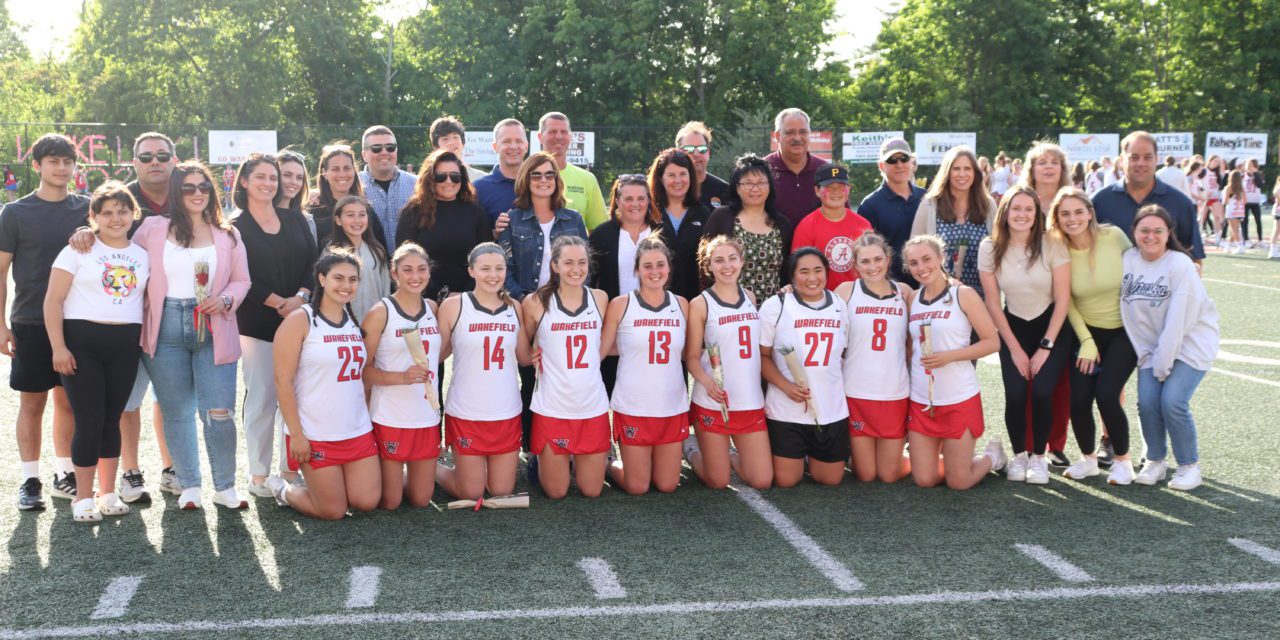 WAKEFIELD — From the very first senior running through a tunnel of teammates and youth lacrosse players out towards their families and Red Sea super fans to the very last whistle, Landrigan Field was buzzing last night for the Warrior girls’ lacrosse team’s class of 2022.

Wakefield beat Tewksbury 13-7, improving to 10-7 overall. The Warriors had already punched their ticket to the Div. 2 state tournament, but with this win, it felt official.

“I told the seniors today, ‘You lost your sophomore year and you all stuck together. Then when you were juniors, you had no seniors and stepped up to be the leaders of the team. Again, you stuck together and now look where you are. You played, persevered and now you’re in the tournament,’” said head coach Cara Luca. “They should be proud of themselves for all of their hard work.”

That journey, filled with so much uncertainty and adversity, is what made this Senior Night so special. It was evident at the start, highlighted by the next generation of girls’ lacrosse Warriors, who got the incredible opportunity to be a part of the team and watch their favorite players get announced and run through that tunnel, their own songs blasting from the speakers as they ran on to their next journey.

“I wasn’t expecting that many youth lacrosse players, we were all amazed by it,” said Luca. It’s a tradition for Luca’s teams, but there was something extra special for the first girls’ lacrosse Senior Night ceremony since 2019. “The tunnel with the girls coming down and their own music playing, it was a really cool moment.” 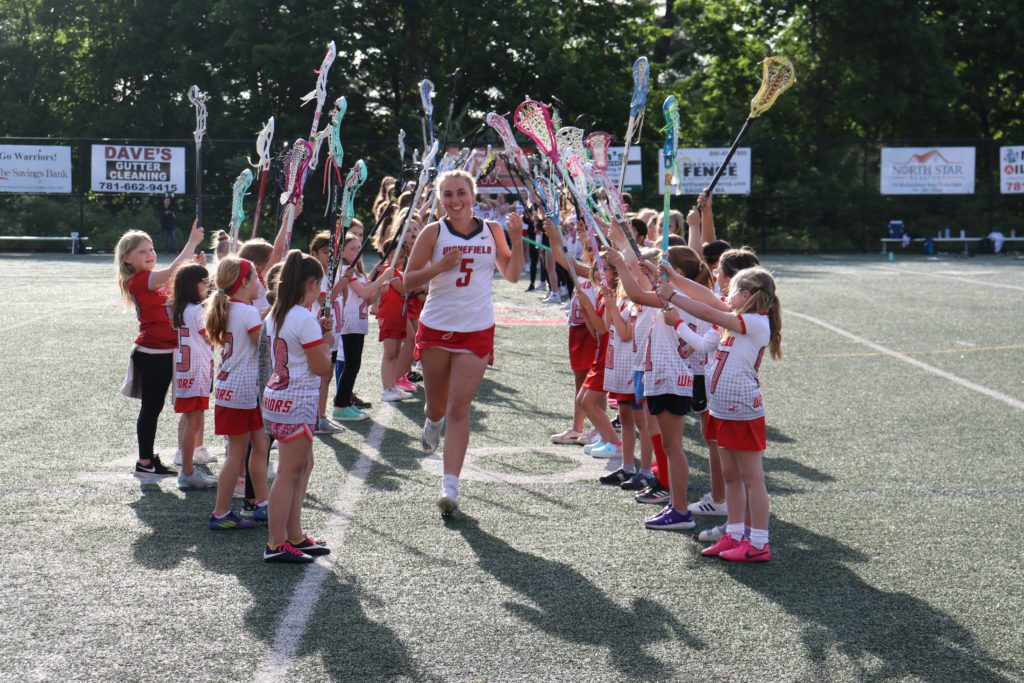 WAKEFIELD YOUTH lacrosse players helped the Warriors celebrate the seniors including Caroline Benedetto who is pictured running through the tunnel. (Dan Pawlowski Photo)

On the field, Wakefield settled the nerves when Luca called timeout with Tewksbury up 4-1. They finished the first half strong as the teams went into the break tied at 5-5. The second half was all Wakefield as they outscored the visitors 8-2.

Senior captain Bella Dimare had an incredible 16 saves, coming up huge to keep her team in it in the first half before figuring out Tewksbury’s attack and frustrating them completely in the second half.

“Bella is truly amazing I don’t even know what to say about her,” said Luca of the Framingham State lacrosse commit. “There’s never going to be another goalie like her. The team feeds off of her when she makes those amazing saves. She was phenomenal today.”

Senior captain Kaylee O’Rourke had a strong game in the midfield and on faceoffs, playing great defense, clearing and setting up her offense for success.

In addition to Nardone, senior Mary Rose Anjim had multiple great defensive plays including a one-on-one stop to turn back a breakaway with her Warriors holding onto a 7-6 lead early in the second half.

Dimare made an incredible stop on a free shot and Seabury scored her second of the final half to make it 8-6 and send the Warriors on their way.

Berinato followed with two goals, one set up perfectly by Nardone and Covelle sealed the game with back-to-back goals, one off a perfect dish from Seabury in stride to make it 12-6.

The final and loudest goal of the game belonged to Benedetto who made a nice cut to get open, received a pass from Taylor and released it quickly, sending the Warrior bench and the Red Sea to another stratosphere.

All along, Wakefield’s seniors set the tone for the night. Attacker and Red Sea favorite Elise Theriault caused problems for Tewksbury’s defense all game and the group’s newcomers, Molly Grady and Ally Forti each played an important role, including a top-notch rendition of the National Anthem sung by Forti at the start.

“Seven of the seniors have played straight through and Molly and Ally have fit right in this season,” said Luca. “They’re just a good group of girls. They’re close, they’re friendly, they’re positive. Their leadership was amazing this year.”

The Warriors will now lock in for their final game of the regular season on Friday, 4 p.m. in Watertown. Burlington sealed the Freedom Division title with a win over Melrose last night, but Wakefield can take sole possession of 2nd with a victory over the Raiders.