An adventure with lasting impact 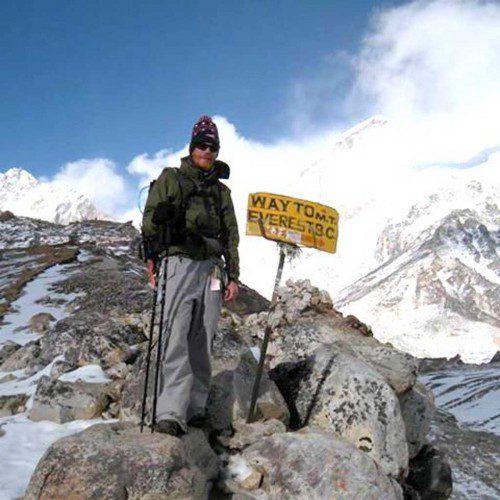 FORMER Melrose resident Richie Pittenger and three of his friends realized their dream of climbing Mt. Everest in April. Only hours after their flight departed Nepal for the U.S. the 7.8 earthquake struck, leaving them to wonder if their Nepalese friends had survived. Pittenger is the son of Nancy and Fred Pittenger, who once owned Wakefield Paint and Decorating Center on Main Street.

There was nothing out of the ordinary that might have suggested a major quake was about to rock the earth — not a slight tremble, not a falling rock, not

even a gut feeling. Only the animals may have known what was coming.

But there was that bit of rain the day before the 7.8 earthquake struck Kathmandu, Nepal. In hindsight, it unnerves Richard (Richie) Pittenger, who grew up on Lincoln Street in Melrose, to think that he and his companions may have been in the thick of it, that they may have been among those who lost their lives.

The quake on Saturday, April 25, destroyed not only thousands of homes, leaving hundreds of thousands homeless but claimed more than 8,000 lives and injured more than 19,000 people.

Pittenger, 34, says he is lucky to have escaped. He left Nepal the day before the quake after realizing one of the goals on his bucket list — to climb Mt. Everest.

That Pittenger did not reach the summit is of little importance. What matters is that not only did he make the trip but he made it home alive.

The son of Nancy and Fred Pittenger, one-time owners of the former Melrose Paint and Decorating Center on Main Street in Greenwood, Pittenger’s story started with what he calls a “pipe dream” of climbing Mt. Everest.

“It was at the top of my bucket list,” said Pittenger, a resident of Pflugerville, Texas, an Austin suburb.

After reading Jon Krakauer’s book “Into Thin Air,” a detailed account of what it was like to be present on Mt. Everest in 1996 when a rogue storm killed eight climbers and stranded several others, Pittenger became obsessed with the idea of climbing Mt. Everest himself. Though not an adventurer or camper by nature, he read every book he could find on outdoor adventures and viewed documentaries on the Discovery channel.

“Climbing Mt. Everest was ‘a little calling,’” he said.

One day his co-worker at Dell Computers, Reinhold Bergs, told Pittenger about a Groupon coupon two-week trip to Nepal and soon word spread to his friends in Washington, D.C. Travis and Vanessa Sheppard.

All four bought the coupon for $1,000 apiece, which included guides, porters and lodging in tea houses, plus plane tickets for another $2,000 each. Then the planning got underway. Pittenger said he bought a backpack, hiking boots, cold-weather clothing and other gear he would need for the trip.

Pittenger and Bergs left Austin, arrived several hours later in Washington, D.C., met the Sheppards, and the foursome soon took off for Dubai, Saudi Arabia where they had a seven-hour layover. The date was Tuesday, April 7.

Though hot and humid, Pittenger said he and his companions had time to look around Dubai. He said it is one of the prettiest and cleanest cities on the planet.

“We didn’t see a car over two years old in Dubai,” he said.

From Dubai, they flew another four hours to Kathmandu, arriving at midnight on April 8. Their guides met them at the airport and joined them with their porters, who spoke no English. When they reached their hotel, they had to climb through a tiny trapdoor to register and access their rooms because the main door had already been “rolled up.” They were exhausted, said Pittenger, having just completed a 30-hour trip but exhilarated, too.

The following day, they were rested enough to fly to Lukla, said to be the world’s most dangerous airport due to its angled air strip, steep cliffs and intense winds.

“We landed dead center in the Himalayas and found ourselves surrounded by high, snow-capped mountains,” said Pittenger. “The feeling I had cannot be described other than to say it was a relief that we had made it and pure happiness over being there.”

On the first full day, they walked for three hours through villages and small towns where images of poverty came to life. (Over 30 percent of Nepalese live on less than $14 U.S. per person, per month, according to the national living standards survey held in 2010-2011. People are sick, disabled, displaced and abandoned children are everywhere. They are largely illiterate and those fortunate enough to own small farms are deeply indebted. Finding safe drinking water is a constant problem.

In spite of the impoverished conditions, Pittenger said they found the people kind, friendly and more than willing to help.

They finally reached the base camp at Mt. Everest — 17,000 feet above sea level — where most people start the climb to the summit. (Mt. Everest reaches a height of a little over 29,000 feet.) Though Pittenger and his friends made it to base camp, five others in their group did not due to altitude sickness. They had to be helicoptered out.

“The valley was enormous,” said Pittenger. “The mountains were very high and it was cloudy so we couldn’t see the tops.”

From their vantage point, they could see Khumba Icefall, the site of an avalanche where 16 climbers and Sherpas were killed in April 2014. Over a half-mile wide and bounded on both sides by sheer rock walls covered with hanging glaciers, the Icefall is always dangerous. There is no safe route through the tumble of ever-shifting, jagged, building-size blocks of ice.

“The whole area was silent except for people taking photos,” said Pittenger, adding that other than yaks and people there was no living thing, not even a tree.

It was Friday night, April 24, when Pittenger and his friends flew out of Nepal to come home. Then, in the morning, not a dozen hours later, the earthquake struck.

“We were flying over Iceland when I heard the news,” said Pittenger. “I was dozing a little but still watching a movie on a little screen mounted on the seat in front of me. All of a sudden, news about the earthquake scrolled across the bottom of the screen.”

Pittenger said it took a few minutes for him to process the information and he was “truly stunned” when it finally hit him.

“Everyone has a time,” he said. “We were lucky and fortunate that the timing was on our side.”

He said he thought back and remembered all the people they had met.

“I couldn’t help but wonder if they were safe and OK,” he said.

It was later learned that their guides’ and porters’ villages were completely destroyed. A week passed before they heard that their Nepalese friends had survived. The second earthquake on Tuesday, May 12 took place just up the mountain from where they were staying. Dozens more were killed.

“These people had nothing and now they had even less … and here I was, going home to a gorgeous house,” Pittenger said.

His next goal is to see a Great White Shark in the wild — possibly off the coast of South Africa or Australia.

Until then, he will continue his work in sales for Dell, look forward to seeing his parents and keep up communications with his friends.

“Going to Nepal is an adventure we will never forget,” he said. “We’re glad we got to go. What happened the day after we left came out of the blue. We just hope there are no more earthquakes.”

Since arriving home, Pittenger has partnered with Dell to raise funds for the Red Cross disaster relief. He says, “I can’t help but think of the random people we talked to over the past weeks and just hope they made it out OK. It’s something we will never know.”