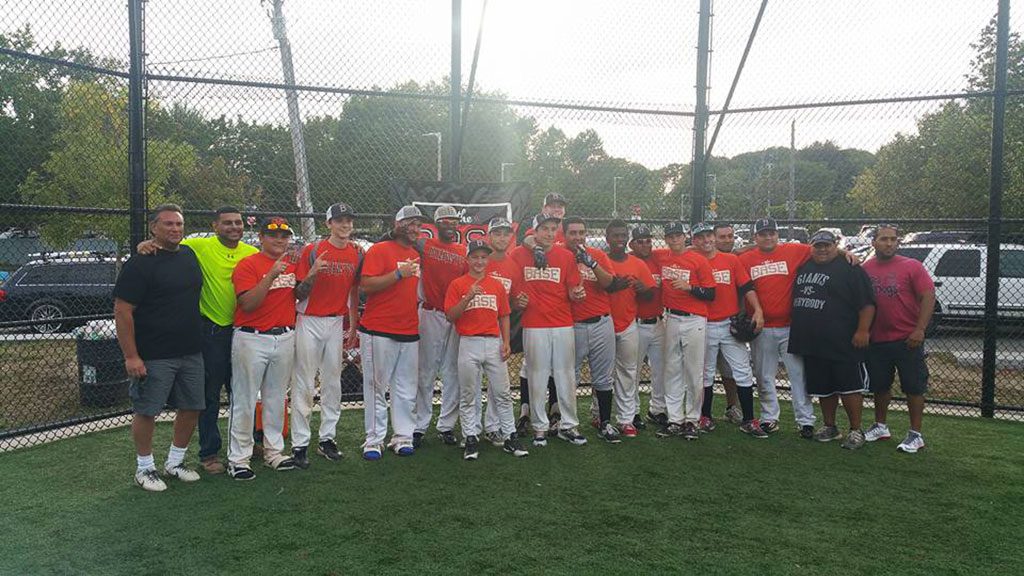 THE ANGEL baseball Giants team were the 2015 BASE HITZ Summer League Champions. Melrose resident Ryan Censullo was a member of the squad.

MALDEN — The Giants Senior LTA team went into the Tournament of Champions as the three seed with a 10-4 record.

After a first round 1-0 heartbreaking loss to Stoneham, the Angel Baseball Giants end up in the losers’ bracket but they bounced back with heart and drive. The Giants went to Framingham to play an elimination game. Rookie pitcher Jeam Castillo got the ball and pitched a needed shutout as the Giants won the game 1-0.

Playing at Pine Banks against Stoneham in an all or nothing game, the Giants gave the ball to another young arm when Steven DiBlasi got the ball. After a shaky start and letting up four runs in the first, the Giants had their backs against the wall until veteran Marc Woodman hit a three-run bomb over the center field fence.

After that, the Giants offense came alive and put up 10 runs beating Stoneham 10-5.

The win put the Giants team in the semifinals against rival North End. It was a college pitching duel between the North End’s Curry College hurler and Angel Baseball’s St. Joseph’s wing Jovan Henriquez. As expected it was a pitchers’ duel, with the North End Dodgers on top 2-1 going into the seventh inning.

With two outs in the top of the seventh, leadoff hitter Ricky Mendez drew a walk, then rookie second baseman Ryan Censullo of Melrose hit a sharp grounder that the shortstop couldn’t handle. With runners on first and second and two outs, Jamel Vilmont stepped into the box. After two quick strikes Vilmont worked the at bat to a full count then hit a 360 foot home run that put the Giants up 4-2.

Henriquez took the hill in the bottom half and struck out the side. The win gave the Giants a bid to win the 2015 LTA Tournament of Champions versus Billerica.

The LTA Giants championship run came up short with four outs to go. After leading Billerica by a score of 3-0 in the bottom of the sixth inning, Billerica took advantage of two consecutive errors by the Giants and gained the lead with four runs scored.

This was the Angel Baseball Giants second trip in a row to the LTA Championship and the team expects to be back for a third time next year to finish the job.

The Angel Baseball Giants Basehitz team went into playoffs with the top seed having gone undefeated in The Base’s summer league.

In the first game the Giants hosted Lowell at Devir Park and piled on the hits and runs behind a group shutout thrown by Matt O’Connor, DiBlasi and Ryan Schaefer. The final score was 8-0 and the team advanced to the semifinals.

On Saturday, Aug. 8, the Giants played Jamaica Plain in the first game of a doubleheader to advance to the championship game. In the first game Giants’ coach Bryan Straccia opted to go with young lefty Blasi and the hurler answered the call allowing two runs on one hit in seven innings pitched. Offensively the Giants stacked up seven runs in a 7-5. win.

In the second game of the doubleheader, the Giants faced The Base’s Astros team with O’Connor on the mound. It was a well-played game by both teams, and as President and Founder of The Base, Robert Lewis Jr., said “the way baseball should be played.”

The Giants went up early but lost the lead in the fourth inning after the Boston Astros tripled to right field with runners on first and third to take a 2-1 lead.

In the fifth inning, 19-year-old Vilmont hit a long inside the park home run to left field to tie the game at 2-2.

Both teams squandered chances to score in the sixth inning but in the bottom of the seventh O’Connor led off with a triple. After the next two batters walked to load the bases, Schaefer drilled a line drive base hit to right field as the Malden Giants celebrated a 3-2 victory to capture The Base League’s U19 championship.

After a two week playoff break, the Angels G League will continue this week. Angel Baseball’s “G” league is its inter-league program. Each week, players are placed on a different team and play a single elimination tournament where a new “G” Champion is crowded. Come down to Devir Park to watch the action.

The Angel Baseball Giants program is now accepting applications for its fall baseball program. Open to new and returning players, ages 8-21, this is a great opportunity to improve your skills while having fun in the off season. Practices will begin on Sept. 2 and run throughout the fall. For more information contact [email protected]

Angel Baseball was started with the goal to provide an opportunity for local ball players to play competitive baseball at a nominal cost. No player is turned away because of an inability to pay. The core mission of the program is to provide baseball training and conditioning; to provide support to players both on and off the field; and to provide players with the tools needed to go from the baseball field to the college classroom. Learn more at www.angel-baseball.com.