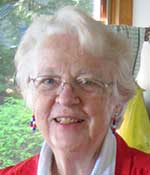 MELROSE — Ann (Minott) Dawson, 87, passed away peacefully in her sleep on December 25 in the loving presence of her family.

She was the cherished wife of William E. Dawson for 62 years, who predeceased her by less than four months. Ann was born to James and Priscilla (Ilsley) Minott in Melrose. She spent the majority of her life there, and in Alton Bay, NH.

Ann graduated from Melrose High School and went on to earn her BA from Massachusetts College of Art and Design.

She taught art in the public schools of Middleborough before becoming a full-time homemaker. Her personal works of art are treasured by her family, many of which have nautical and seashore themes.

The Melrose First Baptist Church was central to Ann’s life. She was a lifelong member serving on various boards and committees, and as a Sunday School teacher. She also participated in many groups such as Bible study, the BYF, and Young Married Couples. As an artist, she was frequently called upon to create posters, cards, and one stunning mural for the church that can still be seen in the baptistry. She very much enjoyed doing for others.

“You can’t create out of a vacuum… “ was a favorite quote of Ann’s and we think she took this to heart. Especially around the holidays, when all her artistic delight went into decorating and making things beautiful. Her studio was an important room in the home. But her creative force imbued the everyday sense of running a household as well.

Often overlooked and rarely appreciated, the homemaker role nevertheless suited Ann as she sailed through the challenges of raising her family. You would have to look very closely at the socks she had darned to be able to tell, she was that good. Her special birthday cakes were known throughout the land. A dolphin, a pony, a train, a doll — whatever your favorite things, a cake for all.

In addition to being chief cook and bottle washer, Ann was a square dancer, a one-time piano player and enjoyed writing. She was a very thoughtful person. It should go without saying that she went to very great lengths to ensure that her students and her own children would find creativity and enjoyment of the arts in their lives.

Sailing and boating were a passion shared from early on with her husband Bill. They sailed out of Marblehead, enjoyed races and many other excursions off the Massachusetts north shore. In later years with the kids, they spent their summers at Lake Winnipesaukee. Ann was a gracious hostess, along with Bill, opening their homes to so many friends and family as often as possible. “Come early and stay late!” was Mom’s commandment.

Ann was the devoted mother of Karen Dawson of Burlington, VT, Peter W. Dawson and his wife Rosemary Breslin-Dawson of Portsmouth, NH, Cynthia Kenyon and her husband Rick of Brattleboro, VT, and Sally Ann Dawson and her longtime companion Frank Kulis of Springfield. She was the dear sister of Charles Minott and his late wife Anca Bratu-Minott of Paris, France, John Minott and his wife Sue of Princeton, and Ruth Cloues and her late husband David of N. Chelmsford. She was the loving grandmother of Michael Dawson, Kevin Dawson, Sarah Dickstein and Danielle Dickstein. She was the cherished great-grandmother of Brady Bradshaw. Also survived by many beloved nieces and nephews.

Relatives and friends gathered in honor of Ann’s life during visiting hours at the Robinson Funeral Home, 809 Main St., Melrose on Monday, January 2, from 4 p.m. to 7 p.m.

Memorial donations in her name may be made to the First Baptist Church, 561 Main St., Melrose, MA 02176.