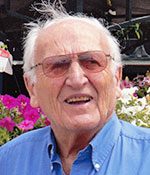 MELROSE — Anthony Joseph Carbone, 92, passed away at his home in Melrose on July 6, surrounded by his loving family.

Anthony was born in Boston on June 8, 1923, was raised in the North End of Boston and graduated from English High School. Mr. Carbone served his country with pride during Word War II in the U.S. Army. He was a Disabled American Veteran who served in Rhineland, Ardennes, Central Europe and participated in the Battle of the Bulge.

Anthony worked as a mechanic at American Airlines for 43 years and was instrumental in starting the workers’ union. He also served as president of the union for many years. After marrying the love of his life Ann, he moved to Melrose in 1974 and had been a resident ever since. Anthony was affectionately known as “Uncle Nunnie” to his wonderful family. He was a member of the Norman Prince VFW in Melrose, was a life member of the DAV, a member of the 75th Division Veterans Association and a member of the 3 Diamond Society American Airlines Northeast Vanguard.

Above all, his family was most important to him and he was always there for any family member or friend in need. Anthony was the beloved husband of 40 years to Ann L. (Dunn) Carbone. He was the devoted father of Deborah Jensen and her husband Peter of Boxford; Kenneth Dykens of Worcester; Penny LoConte and her husband Paul of Bradford and the late Sherre Sudano. He was the cherished grandfather of Jonathan, Tiffany and Jason Jensen; Olivia and Toniann LoConte and the late Joshua Jensen. He was the cherished great-grandfather of Alexis Bardell. He was the caring brother of Margaret Antonelli of North Andover and the late Louise Benenati and Blanche Swinney. He is also survived by many loving nieces, nephews and friends.

Visitation was held at the Gately Funeral Home, 79 West Foster St., Melrose, on Thursday, July 9. His funeral will be held at the Gately Funeral Home on Friday, July 10 at 8:45 a.m., followed by a Mass of Christian burial at St. Mary Church, Herbert Street, Melrose at 10 a.m. Relatives and friends are respectfully invited to attend. Interment with military honors will take place at Wyoming Cemetery in Melrose. Memorial contributions may be made in Anthony’s name to the Melrose Veterans Relief Fund, c/o City of Melrose, Attn. Veterans Office, 562 Main St. Melrose MA 02176. To send a message of condolence please visit www.gatelyfh.com.