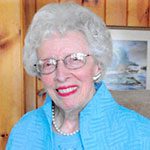 Born in Jersey City, New Jersey, in 1925, to Judson and Grace Place, she spent her early years in rural New Jersey. At age 8, her family moved to Melrose, where she attended the Melrose public schools.

Upon graduating from Melrose High School, in 1944, she attended Forsyth Training School for Dental Hygienists. Thereafter, she was employed as a dental hygienist in Melrose. She was married to Philip Whitehead from 1949 until his death in 1990. The couple had two children, Howard Whitehead, of Topsfield, Massachusetts, and Nancy Dowling, of Augusta, Maine.

Audrey spent her summers in Kennebunkport, Maine, and part of her winters in Florida. In Melrose, she was a member of the First United Methodist Church and the Semi-Circle of the church. She also served as a director of the Melrose Visiting Nurse Association, and was a member of both the Melrose Hospital Auxiliary and Kappa Delta Psi Sorority.

In Kennebunkport, she was a member of the Church on the Cape, in Cape Porpoise, Maine.

In addition to her children, Audrey leaves her daughter-in-law, Mary Ellen Whitehead; her son-in-law, William Dowling; her grandchildren, Daniel Estey, of Boulder, Colorado, and his companion, Katie Gallagher; Meghan Perry, of North Andover, Massachusetts, and her husband, Christopher; Ashley Luskey, of Morgantown, West Virginia, and her husband, Brian; and her great-grandchildren, Logan Perry and Liam Perry. She also leaves her brother, Ronald Place, of Melbourne, Florida; his wife, Elizabeth; several nieces and nephews; and her companion in later years, Robert Englishman, of Fort Pierce, Florida.

Relatives and friends will gather for her memorial service at the First United Methodist Church, 645 Main St., Melrose, on September 26 at 11 a.m. A reception will follow immediately at the church.