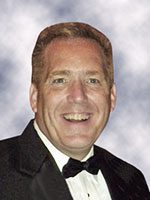 MELROSE — Sean Patrick O’Brien died at Massachusetts General Hospital after a valiantly fight with cancer. He entered eternal life in the early morning of Sunday, October 18, 2015 surrounded by his devoted family.

Born on August 15, 1962 and the sixth of nine children to Gerald and Donalda (Kirk) O’Brien, Sean was a lifelong resident of Melrose. Upon graduating from Melrose High School in 1980, Sean began a four year career with the Navy. After the Navy, Sean attained his bachelor’s degree from Boston University in 1990 and his master’s degree from Emerson College in 1995.

Sean was very involved in the Melrose community, having coached and served as a board member of the Youth Soccer program for many years. In addition to Melrose Youth Soccer, Sean was very active in St. Mary’s Church where he was an Eucharistic Minister and lector. Sean was also very involved with St. Mary’s School and the PTO, serving 2 terms as president and 5 terms as treasurer.

All who were fortunate enough to know Sean were blessed by his extraordinary kindness, selflessness, and compassion. Despite the extended course of medical treatment Sean endured over the last five years, he refused to let his diagnosis define him. Sean continued to embrace life to the fullest with an open heart, positive attitude, and unwavering faith. Sean left this world no differently than the way he lived his life — with dignity and grace.

He is survived by his beloved wife Julie (Kelleher), and adored children Isabel, John, Mary and Peter, all of Melrose; his brother Gerald of Ohio; Colleen O’Brien Senges of Oklahoma; Michael O’Brien of California; Dawn Marie O’Brien of Burlington; Dennis O’Brien of Wakefield; Erin O’Brien of North Reading; Thomas of Wakefield, and Shannon Merlin of Reading. He is also survived by a host of nieces, nephews, aunts, uncles and a wonderful group of supportive and loving friends.

Interment at Wyoming Cemetery in Melrose.

In lieu of flowers contributions may be made in Sean’s name to St. Mary’s School, 4 Myrtle St., Melrose, MA 02176. To send a message of condolence please visit www.gatelyfh.com