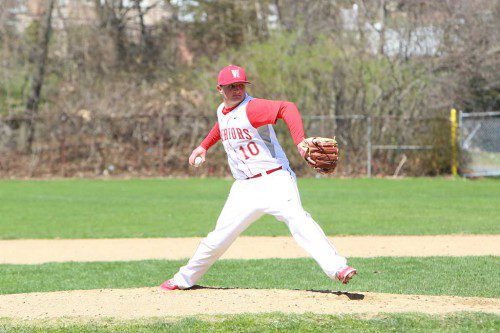 MIKE GUANCI, a sophomore right-hander, earned his second win in as many starts. Guanci pitched five and two-thirds innings giving up an unearned run in Wakefield’s 6-1 triumph against Melrose on Friday at Walsh Field. (Donna Larsson Photo)

WAKEFIELD — For once, the Warrior baseball team had a little breathing room.

After winning a pair of one-run decisions, a two-run ballgame and an extra inning affair, Wakefield posted a 6-1 triumph over arch rival Melrose on Friday morning at Walsh to extend its win streak to five straight games.

The Warriors are now 5-1 overall on the season and 4-1 in the Middlesex League Freedom division since dropping the season opener against Lexington.

Wakefield scored two runs in the first inning, three in the fourth and one in the sixth to defeat the Red Raiders. Melrose scored its lone run in the top of the sixth inning.

The Warriors used a very familiar recipe for winning the game. They got excellent pitching, played good defense, capitalized on Melrose’s mistakes and had some timely hits.

Sophomore right-hander Mike Guanci made his second start and once again pitched very well. Guanci pitched five and two-thirds innings giving up one run (unearned) on four hits while walking and two striking out a batter.

Andrew Auld, a junior right-hander, pitched the final inning and a third striking out a batter and walking a batter.

“Mike Guanci had another great start for us,” said Coach Keith Forbes. “Corey’s (Imbriano) arm has been sore so he hasn’t able to pitch. Mike is the next guy we have turned to. He’s a sophomore and he showed great composure out there. He only walked two batters. He pounded the strike zone and we were able to make the plays behind him. When we do that, it gives us the opportunity to win.”

The Warriors had five hits in support of their two pitchers but they also made the most of three Red Raider errors, four walks and a hit batsman. Matt Mercurio led the way with two hits including a double, while Andrew Patti, Paul McGunigle and Joe Stackhouse had the other three hits. Mercurio, Patti, McGunigle and Stackhouse all drove in runs.

Melrose went in order in the first inning but the Warriors made the most of a leadoff error at first base by Alex Turro to plate two runs in the home half. Imbriano reached second base on the error and Tighe Beck walked. A fly ball allowed Imbriano to tag up and take third. After Beck stole second, Mercurio singled in Imbriano. Patti then had a sacrifice fly ball which plated Beck for a 2-0 Wakefield lead.

Both teams went in order in the second and Melrose’s Cal MacDonald drew a two out walk in the top of the third. Beck drew a one walk in the last of the third and took second on an errant pickoff by right-hander Christian Pizzotti. But Beck was picked off second as Pizzotti faced the minimum three batters in the frame.

The Warriors added a little cushion with three runs as they drove Pizzotti from the mound in the home half of the fourth inning. Pizzotti went three plus innings giving up five runs (one earned) on four hits while striking out two and walking two. He was relieved by McCarthy who went three innings giving up one run, one hit, while striking out seven, walking two and hitting a batter.

Mercurio doubled to center field and Patti blooped a base hit to right field to put runners at the corners. McGunigle smashed a single down the left field line as Mercurio scored. McCarthy came in to pitch and struck out the first batter he faced. But Tim Hurley reached on an error at first base to load the bases. Imbriano drew a bases loaded walk to force in Patti. Beck was then hit by a pitch with the bases loaded as McGunigle scored to make it 5-0.

The Red Raiders mounted a threat to score in the top of the fifth inning. Nick Cordeau singled to left field and advanced to second base when the ball was misplayed in left field by Neil Fitzgerald. Pinch-hitter Dylan Gaita then walked. Both runners moved up to second and third on a sacrifice bunt by MacDonald. Guanci induced a ground ball back to the mound and a fly ball to left field as Melrose came up empty.

Melrose did break through with its only run of the contest in the sixth inning. Karelas reached on an error at shortstop. Two outs later after a nice catch in left field by Fitzgerald for one of two outs, Turro singled to left field to score Karelas. Auld took over after that and induced a pop up to end the inning.

Wakefield scored its final run in the last of the sixth inning. Pinch-hitter Joe Greer walked and stole second. He scored on a RBI base hit to center field by Stackhouse to make the score 6-1.

Alex Devartanian led off the top of the seventh with a walk but was forced at second base on a fielder’s choice. A strikeout and a ground ball to first base resulted in the final two outs as Wakefield celebrated its fifth win in a row.

“We had some timely hits and took advantage of what their defense gave us,” said Forbes. “That’s why I like to see us give no walks, no hit batters and make no errors. We don’t want to give up freebies. We’re doing a nice job. We’re 5-1 but we want to continue to get better.”

The Warriors are scheduled to face Burlington this afternoon at 3:45 p.m. at the Francis Wyman School Field as they seek to keep up their winning ways.