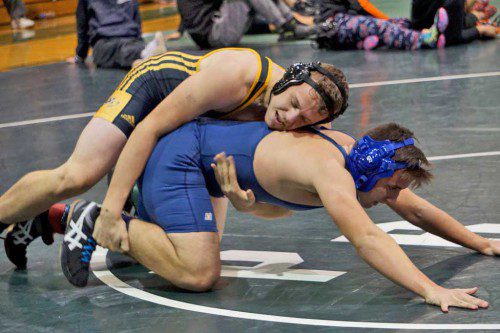 The Black and Gold finished 13th overall in the Pentucket Tournament Dec. 27. There were 20 teams representing divisions 1, 2 and 3 during the tournament.

Stone noted Will Glover and Joe Reardon each defaulted during the tournament after their respective quarterfinal and semifinal matches in order to avoid further injuries “that might eliminate them from future competition.” Senior captain Connor Stead did not compete in the tournament because he was recovering from a scalp injury suffered in the Greater Lowell Tech contest.

“Those three wrestlers could have placed at the tournament and improved our team score dramatically,” Stone.

The Black and Gold compiled a 1-1-1 record against Masconomet, Beverly and North Andover in a quad meet Dec. 30.

“Chris, a first year wrestler with no previous experience, is making quite an impression this season,” said Stone.

Senior Aaron Gautreau (145 lbs.) returned to the line-up after sustaining an early season concussion and pinned his counterpart in 2:12. McCullough (160 lbs.) defeated his counterpart by a 6-1 decision. DiPietro (170 lbs.) pinned his opponent in 42 seconds. Rossetti (138 lbs.), Farrelly (195 lbs.) and senior Tim Goucher (220 lbs.) won their respective matches by forfeit.

Stone noted the Black and Gold and Panthers each won seven matches, which led to a “rare tie in wrestling.”

“Each team took turns sharing the lead,” said Stone. “The Panthers were up 42-36, but forfeited the last weight class, 106 lbs, for the tie.”

The Black and Gold fell 59-24 to powerhouse North Andover.

Rossetti picked up his third win of the season after pinning his opponent in 3:22. Wilkinson (182 lbs.) defeated his counterpart by fall in 1:22. Farrelly (195 lbs.) and Goucher (220 lbs.) won their respective matches by forfeit.

Stone noted the Black and Gold did not field its full line-up in the quad meet due to injuries and illnesses.

“The Black and Gold had their hands full with the perennial Division 2 power Scarlet Knights,” said Stone. “North Andover is also one of the top teams in the state regardless of divisions.” 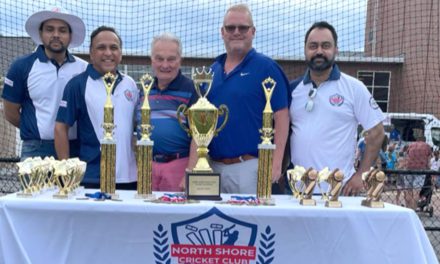 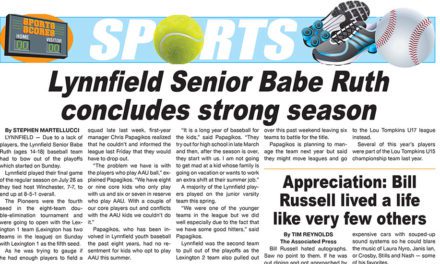