LYNNFIELD — When Summer Street School first grader Sam Halpern, 7, was diagnosed with a streptococcal infection in 2018, he suffered the loss of both legs below the knee and his right hand. But little did young Sam know then how much his community would step in to help him and his family through this difficult time.

First came a fundraiser hosted by the Lynnfield Moms Group that would help with medical expenses and special sports equipment Sam would need to continue playing the sports he loves. Then, earlier this month, an organization called Blueprints of Love arrived at his home to redesign the bedroom Sam shares with his brother Ben, age 5.

The local nonprofit organization’s mission is to design rooms of healing and creativity for children battling serious illness. The operation was founded in Boston and is staffed 100 percent by volunteers.

“Each project has the sole purpose of revitalizing a child’s spirit and imagination while providing all the essentials for a healing space of his or her own,” said Blueprints of Love Design Director Jessica Griffin.

Griffin became involved with the organization several years ago while attending an interior design industry event and meeting founder Melinda Cabanilla. After volunteering for a few hours on a Saturday project, Griffin quickly fell in love with the organization. She now either oversees or develops and executes each room’s redesign. 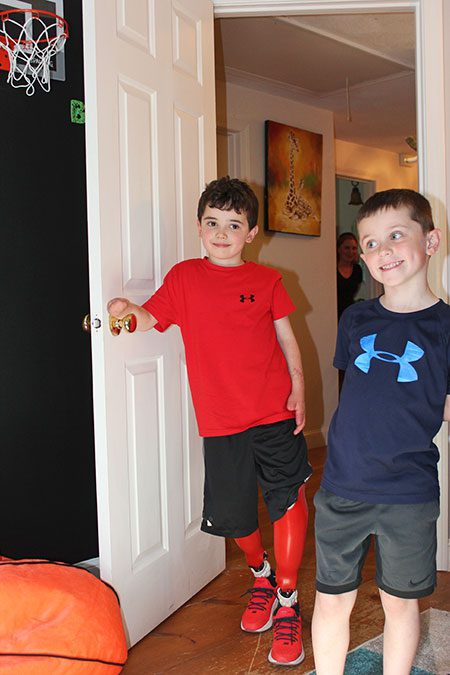 SAM HALPERN (at left) and his brother Ben were overjoyed to see how Blueprints of Love redesigned their shared bedroom. (Courtesy Photo)

On Saturday, May 18, Griffin and Blueprints of Love President Lorraine DeVaux and Program Director Sharon Johnson arrived at the Halpern’s home with David Tapia, the father of a child whose room was also redesigned. He offered his help along with a team of nine people from Interior Architects, a global design company that also provided a generous financial contribution.

“For this project, we interviewed the Halperns and Sam and Ben back in March to get an understanding of the boys’ favorite colors, dream bedroom wish list, specific items to keep in the room and items they would like to add,” said Griffin. “A love of sports was a big theme shared by both boys.”

For instance, Sam had received a special Fenway locker given to him by the Red Sox, so this piece became a big inspiration for the room’s design.

Since both boys share the bedroom, the challenge was to incorporate two beds while giving them as much play space as possible. Therefore, bunk beds were a top priority.

“Although Sam is fairly mobile with his prosthetics, we knew that a bunk bed ladder might be difficult for him to navigate, so we chose to install bunk beds that had more of a staircase than a ladder,” explained Griffin. A trundle bed was added for sleepovers.

The majority of the walls were painted a light gray with one blue accent wall to play off the sports theme and to allow other brighter colors to pop in the bedding, area rug and decorative touches.

Since Sam’s favorite color is red, it was decided that their existing bureau be painted a bold red to make a nice statement in the room. Gray curtains were hung at the two windows.

So, what did the boys think about their bedroom redesign?

“I’d say they really loved it,” said Griffin. “Ben climbed right up the stairs to his top bunk, and Sam got on his bottom bunk right away. Both were smiling enthusiastically.”

In addition to painting all the walls in the room, hanging curtains and building bunk beds, the team mounted a basketball hoop at the top of a chalkboard wall so the boys can shoot hoops and keep score below.

“We also painted red baseball stitches on their sliding closet doors,” noted Griffin. “And we painted and built a side table to look like a baseball on top with wooden bats for the leg supports.” A long bench with a storage area was also added. It now serves as a reading space and a seat where Sam can put on his prosthetics.

Overall, the project took Blueprints of Love about eight weeks from the time they first met and interviewed the Halpern family to the day of the redesign. After the interview, the team drew up the floor plan and developed the design concept. Next, they specified and purchased everything needed.

Though the Halperns now live with the benefits of Blueprints of Love’s hard work, Griffin also considers it a “gift” to have been part of the team that brought a bit of joy and happiness to the Halpern boys.

“It’s our hope that in the midst of going through such a challenging time, these children are able to get excited about their new space and dreaming of what they’d like to see and, then, ultimately seeing those dreams come true,” Griffin commented. “Sam and Ben’s parents, Michelle and Joe Halpern, are such wonderful people, and they were so grateful to have this opportunity for their sons.”

So far, Blueprints of Love has handled eight redesigns. The redesign at the Halpern home was the first to be completed in 2019.

The organization is always looking for more volunteers since makeover projects need a lot of hands on deck.

“All skill levels are welcome,” said Griffin. “We work hard, and we have a lot of fun. Best of all, we make a difference.”