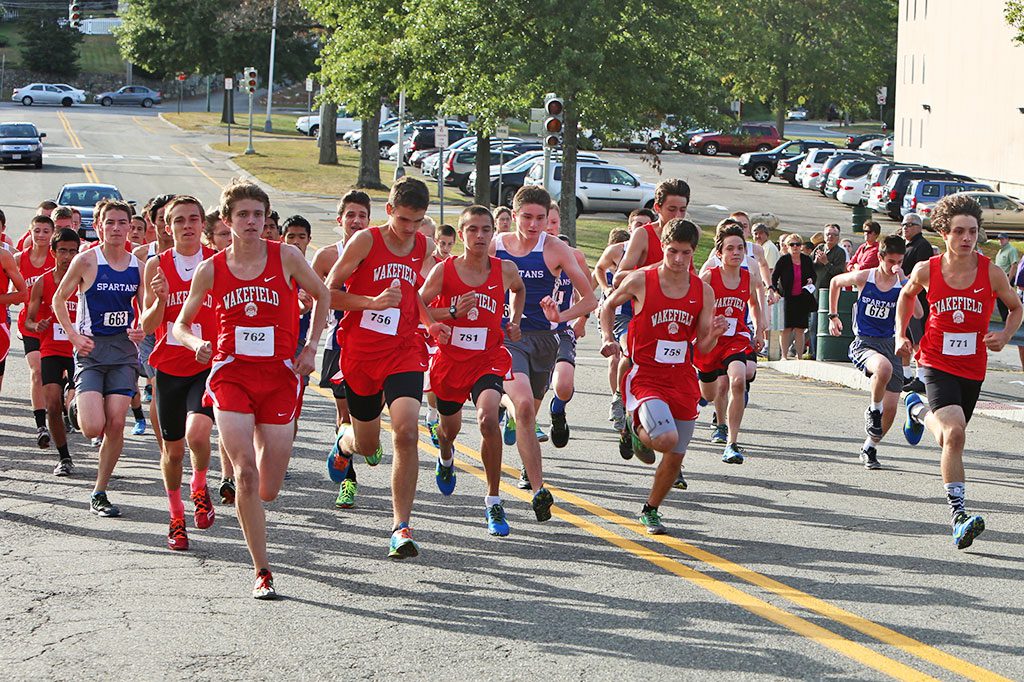 THE WMHS boys’ cross country team had a very good showing at the Twilight Invitational Meet which was held on Saturday at the Barnstable Fairgrounds in Falmouth. (Donna Larsson File Photo)

FALMOUTH — The Wakefield Memorial boys’ cross country team traveled to Cape Cod on Saturday to compete in a full evening worth of races at the Massachusetts State Track Coaches Association (MSTCA) Twilight Invitational.

The atmosphere was electric with about 80 teams being represented in two divisions and fast times were turned in over the fast 5K course on the Barnstable Fairgrounds in Falmouth.

Under the lights the Warrior varsity team scored 116 points and just missed the victory by 14 points, placing second behind defending All-State champion Hopedale from Central Massachusetts. There were 30 full squads entered into the Division 2 race with 236 runners from over 40 schools.

The varsity race got out to a fast start and former best times were destroyed.

Four of the boys in the race ran under 17 minutes and were led by Adam Roberto (16:30) and Alec Rodgers (16:30) finishing within a second of each other and placing 15th and 16th overall. Junior Ryan Sullivan ran a strong race placing 20th in a time of 16:39. Richie Custodio also ran his best race with a time of 16:52 and placed 29th.

Jack Stevens rounded out the scoring with a 53rd place finish in 17:21. Chris Skeldon was 64th in 17:33. Tyler Whipple competed in his first big varsity race and placed 83rd in a personal best time of 17:52.

The day started off with the freshmen running very well in a single combined division race with ninth graders from over 80 schools. The boys placed fifth against 29 full squads.

Thomas Harrington had a stellar race placing 12th against many runners who have been training for a few years now. He ran a very fast time of 11:23 over the 2.1 mile course.

The sophomore race also was combined and Wakefield had some great performances. The Warriors placed 10th overall and third against the small schools.

Tommy Lucey ran an incredible race and improved his 5K time by over a minute placing 10th against 236 sophomore runners across the state finishing in a time of 16:38.

Matt Greatorex also impressed with a time of 16:50 placing 20th. Robert Shaw had a much improved time of 17:30 and placed 45th.

In the Division 2 JV race it was easy to spot the Warriors as many of them ran to the front early and won the event with a very low 26 points over second place Dover Sherborn which had 96 points.

“I am extremely happy with how things went this weekend. It’s amazing to see how much the boys continue to improve from week to week. They continue to prove that they have not reached their fullest potential and are motivated to get the most out of themselves,” said Coach Perry Pappas. “The training over the season, throughout the summer and prior to that continues to make them all better runners and they are experiencing success as a result. Our next big test is the Middlesex League Meet on Nov. 2 followed by the Div. 4 Eastern Massachusetts Championship.”

First up is a Middlesex League crossover meet against Lexington this afternoon at 3:30 p.m. at the Lincoln Park Course in Lexington. It is Wakefield’s final dual meet of the season.