Warriors return many veterans, hope to have a strong 2014-15 season 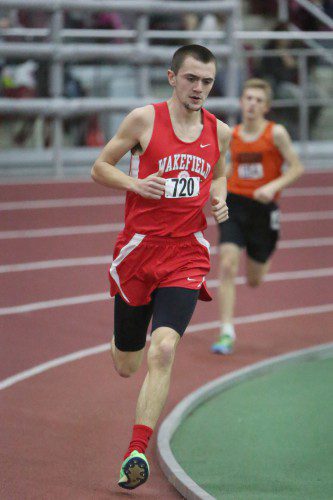 JACKSON GALLAGHER, a senior captain, returns to the middle distance events and up. Gallagher is the defending Div. 4 state champion in the 600 meter run. (Donna Larsson File Photo)

WAKEFIELD — The way the numbers have grown, the Wakefield Memorial High boys’ indoor track team is going to need a bigger field house for practice.

The Warriors have seen their numbers swell to 90 athletes and having enough room at the Charbonneau Field House to practice and on the bus to the meets are problems that third year head coach Ruben Reinoso and his staff are dealing with.

The one dilemma Wakefield won’t have is having enough athletes to fill the 10 events.

Wakefield finished with a 4-2 overall record and 4-1 record in the Middlesex League Freedom division. The Warriors were a league title contender and they had a good showing in the postseason. With the numbers — many of which are returning athletes — Wakefield hopes to have an even better 2014-15 season.

“We have 90 kids,” said Reinoso. “It’s tough to practice inside the field house and we can only bring so many athletes on the bus to meets.”

All of the captains contributed to Wakefield’s success a year ago along with a few graduated seniors.

“We will be missing Anthony Lawson who has left us with some big shoes to fill,” said Reinoso. “Patrick Scheeler and Aaron Lucci were also key pieces. We return a strong team and every year we want to improve. Right now, we look pretty good but we will see how good we look after our first meet against Watertown.”

Gallagher was the 600 meter champ at the Div. 4 meet a year ago and made all-states. He will be leading the group of distance runners which will compete in the 600, 1000, mile and two mile.

The sprinters in the 55 meter and 300 meter dashes will be led by Palic and Hurton. The rest of the sprinters are junior Eric Chi, junior Jian Glen Gallardo, junior Kevin Russo, senior Kyle Geaney and senior Cam Yasi.

The two returning hurdlers include junior Zach Conlon and sophomore Tyler Moore. Wakefield is looking for a couple of more hurdlers but Reinoso is optimistic that the Warriors can find a pair of runners that compete in the event from the large squad that they have.

Headed to the field events, Russo and senior Pat Casaletto, a senior, are two returning athletes in the high jump.

In the shot put, Joly will lead the way and is one of the top throwers in the Middlesex League. Junior Jared Regan and sophomore Joe Connell add some depth to the event.

Two senior newcomers from the football team also will throw the shot put. They are seniors Dylan Brady and Pat Boyson. Also new to the shot put are sophomores Jack Stevens and Will Shea.

“Our goal every year to go out and win a Middlesex League title,” said Reinoso. “It’s nice to win the league title but if we don’t then going out and winning a state title is good because you compete against the best teams. We beat Burlington in the state meet after being a close runner up in the league.

“With the kids returning the possibility is there to win the league title,” added Reinoso. “We also want to go out and win the state relays and a state title.”

Wakefield will find out how good it is and what areas need improvement when it takes on Watertown in the season opener tomorrow night at 5 p.m. in the first block of M.L. dual meets at Harvard University.