Warriors edged by Reading in 10-9 thriller 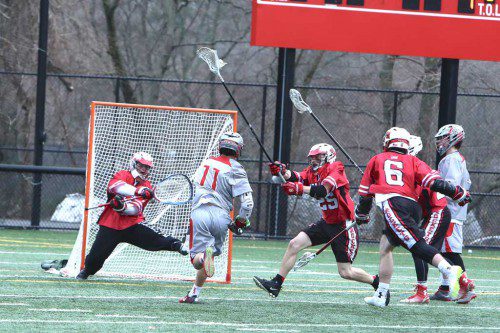 BRANDON GRINNELL (#11) tallied four goals for the Warrior boys’ lacrosse team on Friday afternoon at Landrigan Field. Despite a comeback effort in the fourth quarter, Wakefield was edged by Reading, 10-9, as it suffered its first loss of the season. (Donna Larsson Photo)

WAKEFIELD — While most of the Wakefield Memorial High spring sports teams are struggling to get games in with weather and field conditions, the varsity boys’ lacrosse team’s had no such issues due to the magnificent shape of Landrigan Field, where it hosted its fourth game of the season on Friday afternoon when Reading came to town.

Prior to the Rockets landing on the hill, Wakefield had handled all its previous opponents at home, winning all three matches. However on Friday, Wakefield got its first taste of defeat under first year head coach Andrew Lavalle, falling 10-9 in a thrilling contest.

Reading was a different breed of team than Wakefield had faced in the three previous home games (four overall). The Rockets were a team that matched up well with Wakefield at almost every position. For the first time all season, the game wasn’t dominated with Wakefield in possession.

“We’re a mentally strong team,” said Coach Lavalle as he spoke briefly following the loss. “We made a run at the end but it just wasn’t enough. We had one good quarter. When we started focusing on our fundamentals we got a little bit better at it. You can’t spot them three quarters and just play in the fourth. That’s really what it came down to.”

The game got off to a quick start with Wakefield notching the opening goal in less than three minutes. Pat Leary did the finishing putting the Warriors on top 1-0.

For the final 7:30 of the first quarter Reading was in command of possession but some stingy defense and efficient goalkeeping kept Reading off the board in the first.

With the second quarter underway, Wakefield got hold of possession early and Brandon Grinnell faked out everyone at the game. Feigning to go in one direction before cutting back and firing a shot, Grinnell scored his first of four goals on the day to make it 2-0 in favor of Wakefield.

Not long after Grinnell scored to double the lead for the Warriors, Dylan Brady took a penalty and Reading had a man advantage.

One area of imperfection in the first three games for the Warriors has been their man-down play. Against Reading it proved to be a crucial detriment to their chances of winning.

Reading’s first goal came just after the penalty with Brady off the field and just like that the score was 2-1.

Reading went on to score three more times to total four unanswered second quarter goals. The kicker came with just 10 seconds remaining in the half giving Reading a 4-2 lead at halftime and offering a tantalizing bit of foreshadowing.

“It’s a fundamental thing,” Coach Lavalle said when speaking about how his team got behind. “We made fundamental mistakes in the first three quarters.”

With one quarter remaining, Wakefield was up against the wall down four goals and having very little momentum on its side. The Warriors appeared defeated after three quarters.

“We cleaned it up but sometimes it was just not enough,” the coach said. “In the fourth, a lot of guys put the team on their back. Brandon and Austin (Collard) stepped up at the end but it just wasn’t enough.”

A different team emerged for Lavalle in the fourth, though not before Reading tacked another goal on early in the final quarter to make the comeback trail all the more difficult for Wakefield.

Down by five goals, approaching 10 minutes to play, Wakefield needed some heroic performances if it was to come back and stun Reading by taking the win.

With 10:14 to play, Wakefield’s scoring leader MJ Urbano netted a laser to cut the Reading lead to 7-3.

Just over two minutes later, Wakefield found themselves a man up and Urbano struck again bringing the score to 7-4.

James McAuliffe, who had been dominant at the face-off X in the previous four games, met a tough match in Reading. However in crunch time, McAuliffe was dynamic at the draw. He won the ensuing faceoff following each of Urbano’s goals and, after the second cut the deficit to three, he won the next face off to set up another goal.

With just under 6:30 to play, Grinnell popped up again to cut the Reading lead to just two goals at 7-5.

Six and a half minutes in lacrosse can be an eternity and with Wakefield riding a wave of momentum in the fourth quarter, the Rockets looked a bit stunned.

However, just over a minute after Grinnell’s latest goal, Wakefield’s Steve Marino was issued a slashing penalty which led to Reading scoring a power play goal to slow down Wakefield’s comeback effort.

The game was far from over  however, and with the score 8-5 and with less than five minutes to play, the tension in the stadium was palpable.

Following the Reading score, there was a significant jostle for possession which Wakefield managed to come out on top with the ball. There, Grinnell scooped it up and ran nearly 30 yards toward the Reading goal, spinning away from and weaving through the Reading defenders. When he was within shooting range, Grinnell let loose a shot no goalie was stopping and Wakefield trailed just 8-6 with 4:30 to go.

Under four minutes, down two goals, it was Collard’s time for the Warriors. The young winger found some space in the defense with 3:44 to play and cut the lead down to one at 8-7. Less than a minute later, Collard scored again to tie the game at 8-8.

Reading won the ensuing face off and down the other end, Wakefield goalie Alex Flynn had to stop a goal bound shot from the Rockets, one of his six recorded saves on the night.

“In a lot of the wins I say it would be a lot closer game if we didn’t have Flynn in net,” the coach said of his senior goalie. “This game would have been a blowout without Flynn in net.”

Lavalle may have a point there as Flynn came up big a number of times to shut the Rockets down on the doorstep. Flynn’s positioning in net leaves nothing for opposing teams to shoot at, which became evident when Reading shots stuck the post four times.

The ball rolled away and was picked up by defenseman Brady. Brady hustled the ball to near midfield where he gave it up to Vin Ferretti. Ferretti advanced down to the attacking zone and found  Grinnell who tucked home his fourth goal of the day as Wakefield regained the lead at 9-8 with less than two minutes to play.

The game was far from over and Reading wasted no time getting the goal right back.

It was Reading’s star, junior Dan Cozzi, who led the Rockets with four goals and four assists. Cozzi scored the tying goal with 49 seconds to play to tie the score at 9-9.

With overtime looming, Wakefield had to hold on less than a minute but the Rockets got the ball back with 20 seconds to play and the Rocket coach called a timeout to set up a last second play.

Just out of the timeout, the play worked out and Reading regained the lead at 10-9 with 17 seconds left to play.

Wakefield came out with the next face-off but a buzzer beating effort went wide of the target and Wakefield had fallen for the first time all season. The Warriors are now 4-1 on the season and 2-1 in the Middlesex League Freedom division. Reading is 3-0 on the season.

“They came out with a good game plan and their goalie played very well,” Coach Lavalle said. “You gotta give it to them, they played a great game. We played an OK game. You can’t beat great teams by playing OK.”

It was the first time Wakefield has lost under head coach Lavalle, and he knows the Warriors will need a better effort the next time out, when they head on the road to Watertown. The Watertown game is Wednesday afternoon at 4 p.m.

“We start off with Watertown next week, another tough team and we have to work on being prepared for that,” said Lavalle.