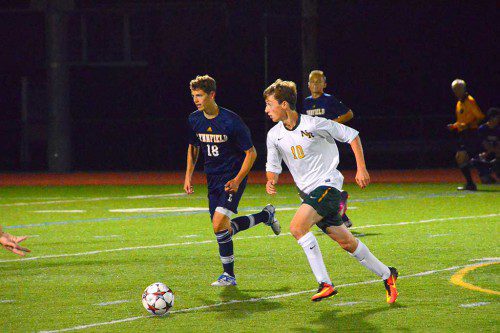 SENIOR CAM DAVIS (10) scored both goals, including the winner with 30 seconds left in the second overtime to beat Watertown, 2–1. (John Friberg Photo)

NORTH READING — The NRHS boys varsity soccer team had a great ride in the MIAA state tournament, defeating Watertown, 2–1 in a double overtime thriller before falling to Jeremiah Burke High School, 2–1 in the north quarterfinals in a game played in South Boston on Monday.

The team finished the season 8–8–2 and provided their fans with many exciting moments.

Down Watertown in 2OT Thriller

Senior Cam Davis nailed down a 2–1 victory over the Watertown Raiders in the First Round of the Division 3 North State Sectional Tournament. This was the third time North Reading has faced Watertown in the tournament in the last four years. All three games have gone to OT and the Hornets have won two of them.

The Hornets got off to a quick start. Just 47 seconds into the game senior captain Anthony Tramontozzi found Cam Davis making a run toward goal and Davis buried a shot into the bottom left corner of the goal for the early strike.

After the goal both teams settled in and in the 24th minute it was Watertown’s turn to strike. On the play the Raiders’ Jackson Da Silva placed a terrific ball off a free kick 25 yards from goal just inside the left post to tie the game. Five minutes later Da Silva had a chance to give Watertown the lead on a penalty kick. But junior Burke Riesenberg made a huge save to preserve the tie. The first half ended deadlocked at 1–1

The second half was a defensive battle. But in the final 10 minutes of regulation it was all North Reading. The best scoring chance came in the 71st minute when Pat Davis hit a half volley from 30 yards out that the Raider keeper saved but left a rebound to junior Nick Catino. But the Watertown keeper made a tremendous recovery to make the save and the game went to overtime.

The first OT was played tentatively by both teams. After a scoreless first period the game was extended into a second OT. In the second OT the Hornets wore down the Raiders, but it looked like the game was headed for a shootout. But with just under a minute left North Reading earned a throw in 40 yards from goal. A Watertown defender disrupted the throw in to senior Zach Robarts but senior Antonio Catino won the ball which he headed toward Cam Davis. Davis turned, beat his defender, bore down on the goal and deftly tucked the ball past the keeper’s legs for the game winner.

The Hornets season came to an end at the hands of the Burke Bulldogs who defeated North Reading 2–1 in the Division 3 North Quarterfinals on Monday. Antonio Catino scored the lone goal.

The game started out great with North Reading creating a bunch of chances by taking advantage of a high defensive line. In the 14th minute the Hornets got on the board. Cam Davis got behind the defense and was one on one with the keeper. The keeper saved Davis’ shot but the ball spilled to Catino who finished off the goal. In the 34th minute the Hornets appeared to take a 2–0 lead on a David Tingley header, but Tingley was ruled offside and the half ended 1–0.

The second half was all Bulldogs. They kept the pressure on throughout the half. Eventually, the pressure wore down the Hornets and Burke tied it up in the 72nd minute. The Hornets responded with their best play of the second half. Unfortunately, it wasn’t enough and a turnover led to a Bulldog counter-attack that finished with the game-winning goal in the 76th minute.