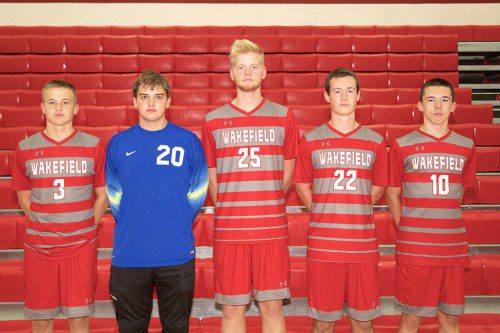 THE WMHS boys’ soccer seniors will be looking to lead the Warriors in the Div. 3 North Tournament. From left to right are Jon Ingalls, Zack Dascoli, Andrew Auld, Andrew DeCecca and Mark Melanson. Missing from the photo is senior Mo Janga. (Donna Larsson Photo)

BYFIELD — The Wakefield Memorial High boys’ soccer team is in the state tournament for the second straight year. This time the Warriors are seeking to have their postseason last more than one game.

To advance in this year’s tournament, the Warriors will need to beat Triton in a Div. 3 North first round game scheduled for tomorrow at 2 p.m. at Triton Regional High School.

The Warriors are in the tourney for the second straight fall due to the fact they finished in second place in the Middlesex League Freedom division. Still Wakefield wants to make the most of the opportunity and earn its first postseason victory since 1999.

Last fall, Wakefield faced M.L. rival Watertown in the first round of the tourney and lost by a 2-1 tally.

This time, however, Wakefield will be facing a Vikings team that finished fourth in the Cape Ann League Kinney division (the large schools) with a 7-6-3 record and 9-6-3 overall. Masconomet (13-1-2), Pentucket (11-2-3) and North Reading (6-4-6) finished ahead of the Vikings.

Triton posted a 5-2-3 record at home and was a pedestrian 4-4-0 on the road. So playing on its home field has been quite an advantage for the Vikings.

Wakefield will have to be aware of Triton’s all-star trio of Luke Reiniger, Eric Rybicki and Khalil Brito. Stopping those three and putting the ball in the net is what the Warriors will need to do to advance.

Head Coach Matt Angelo is in his fourth year as head coach and has led Wakefield to the tournament for the second straight season. Prior to Angelo taking over as head coach, the Warriors hadn’t been in the state tournament since 1999.

This fall, Wakefield has been led by senior captains Mark Melanson, Andrew Auld and Jonathan Ingalls.

The returning juniors are Alejandro Winsor and Braedan Langlois.

Should Wakefield prevail, then it will face third-seeded Pentucket (12-3-3) in the quarterfinal round on Sunday afternoon at 2 p.m. at Pentucket Regional High School.