Girl harriers have a sixth sense at M.L. Championship Meet

Stackhouse medals, Wakefield has a good showing among its peers 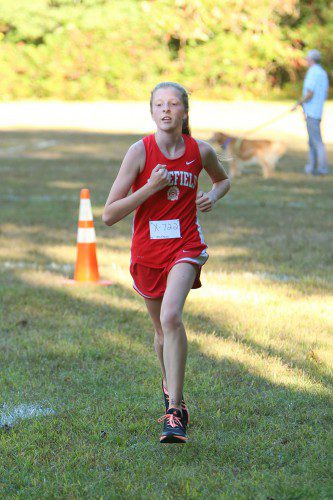 JORDAN STACKHOUSE, a junior, won a medal in the girls’ varsity race by finishing 19th overall in a time of 16:20.0 in the Middlesex League Championship on Monday at the Woburn Country Club. (Donna Larsson File Photo)

The Warriors came in sixth overall in the team scoring with 167 points. But they did finish ahead of all the teams in the division and one from the M.L Liberty division. The five teams that were head of Wakefield were all teams from the M.L. Liberty.

There were no team scores for Burlington and Stoneham.

The highlight of the varsity girls’ race from an individual standpoint was the performance of Jordan Stackhouse, a junior. Stackhouse captured 19th overall with a time of 16:20.0 in the 2.5 mile race. Stackhouse won a medal by finishing among the top 20.

“She ran an impressive race. I thought my girls could have done better if they started off faster,” said Coach Karen Barrett. “The first mile was too slow. This was a shorter course than usual and we didn’t have time to play catch up. (I’m) Looking forward to a better showing at states.”

Wakefield’s sixth and seventh runners were Cassie Lucci, a junior, and Reilly McNamara, a senior. Lucci finished in 49th place at 17:42.1. McNamara took 58th place with a time of 18:29.9.

The Warriors also had three runners entered in the JV girls’ race which was also 2.5 miles long.

In the freshman girls’ race, which is 1.75 miles long, Wakefield had two runners.

“I did want to say that I was happy that we beat all the small schools as well as Reading,” said Barrett. “Also, frosh Isabella Kehoe ran great finishing 11th.”