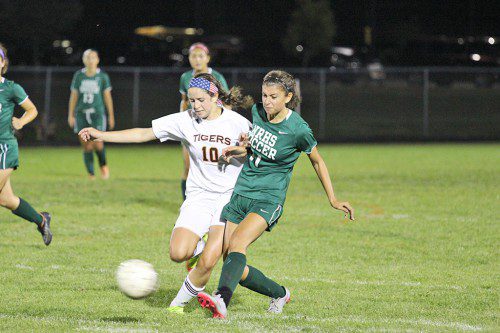 NORTH READING — The Lady Hornets extended their unbeaten streak to nine games with their 5–0 drubbing of the Rockport Vikings on October 6. Junior Jessica Muise had a superb game with 2 goals and one assist.

North Reading was in complete control the entire game. Muise got the party started with her goal directly off a corner in the 16th minute. In the 24th minute sophomore Juliette Nadeau extended the lead when she collected the ball in the box and snuck the ball past the Vikings goalie’s fingertips.

Just eight minutes later sophomore Meredith Griffin made it 3–0 when the goalie coughed up a rebound off a shot from junior Haley Nathan and Griffin coolly finished into the open net. Muise scored another goal in stoppage time and the lead was 4–0 at the half. Senior Johanna Walsh would add a goal in the second half and the Hornets cruised to victory.

The undefeated Hamilton-Wenham Generals snapped the Hornets nine game unbeaten streak with their 1–0 victory on Thursday. Hamilton-Wenham is ranked 12th in the Boston Globe Top 20. Even in defeat, junior Katerina Hassapis was strong in net with 12 saves.

Liz Kirschner put the Generals on the board in the 19th minute when she pushed a loose ball past Hassapis in net. Unfortunately the goal proved to be the difference as North Reading couldn’t get on the board.