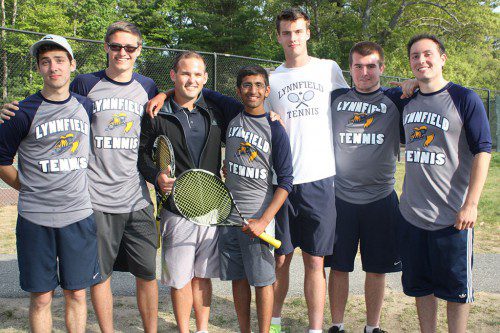 LYNNFIELD — The boys’ tennis team gave head coach Adam Milholland a memorable sendoff on May 18, as the Pioneers defeated Newburyport 5-0 in the locals’ final match of the season.

“The last match of the year is always an emotional one,” said Milholland. “I knew it was my last match as well as the six seniors and Jose. I just wanted to cherish the moment and go out with a win because that is the only way you should go out.”

Milholland decided to hang up his racket this spring after coaching the locals the past three years because he wants to return home to California. Before returning to California, Milholland will be backpacking through Southeast Asia and will in live in Sydney, Australia.

Senior captain Shreyas Kudrimoti said Milholland was instrumental in the seniors’ development when he took over the Pioneers in the spring of 2013.

“We grew as players but we also saw how he grew as a coach,” said Kudrimoti. “He started out very driven and was overly focused on our conditioning. But as the years went on, he adapted to us because we are not a typical team.”

“He figured out what worked and what didn’t,” said Ethan Forrest. “He improved his relationship with his players.”

In addition to improving his relationship with his players, Kudrimoti said Milholland’s coaching style brought out the best of his players.

“He’s young and played with us,” said Kudrimoti. “He plays games with us and participates in drills and he is better than everyone on the team so he can show us firsthand.”

Spanish exchange student Jose Garcia said he had a lot fun playing for Milholland this spring.

“I only had him for a year but I loved him,” said Garcia. “It was great having him as a coach.”

While the Pioneers’ underclassmen will have to adjust to a new coach’s style next year, senior Mike Romano said he, Kudrimoti, Ethan Forrest, Sam Forrest and junior Danny Bronshvayg were able to adjust from former coach John Harrison’s style to Milholland’s.

“We had a different coach our freshmen year and we had Adam our sophomore year,” said Romano. “For the guys sticking around, it’s difficult to go from one coach to another but it worked for us.”

Milholland also praised the rest of the Pioneers after defeating Newburyport.

“I am really proud of the boys,” said Milholland. “We played really well, had great weather and it was great our fans came out. I am really happy with it.”

The Pioneers will be saying goodbye to six seniors this year, Kudrimoti, Ethan Forrest, Romano, Sam Forrest, DiRico and Wilkinson.

A common theme from the seniors was this was certainly a season full of comedy.

“It was a lot of fun,” said Sam Forrest. “I don’t think I have laughed as much as this season. I think everybody got better. I loved having the JV players around because they were so enthusiastic.”

“This was the most fun year of tennis ever even though it wasn’t the most successful,” said Kudrimoti. “I couldn’t have asked for a better team to spend my last season with. I was always smiling whether it was a hard practice or if we lost.”

While Romano said the seniors would have preferred ending their high school tennis careers in the state tournament, he said he enjoyed playing with his teammates immensely this year.

“We all had a great time playing,” said Romano. “Everyone is improving and got a chance to play. It was just a good time for everyone and I don’t think anyone has any regrets about the year.”

“Our record didn’t show how much we have improved over the year but I think the season was a success,” said Ethan. “The varsity and JV teams are really close like a family and we stuck together really well.”

In addition to the six seniors, the locals will also be saying adios to Garcia, who is returning Spain at the end of the school year.

“I had a lot of fun playing with the team even though we didn’t do great,” said Garcia. “I love the team.”