Boys’ tennis team hopes to rise to the challenge

Warriors have big shoes to fill at singles, hope to be competitive in the tough Middlesex League 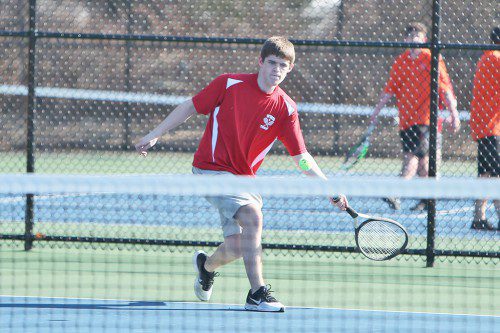 WAKEFIELD — After flirting with a state tournament berth last spring, this year could find the Warrior boys’ tennis team more in a rebuilding mode after its top two singles players from a year ago graduated.

Of course just getting outside on Dobbins Courts to practice and hold matches is a challenge for Wakefield right now.

In fact, Wakefield’s season opener this afternoon at Woburn has already been postponed due to the lack of availability of the Tanners’ home court.

Therefore, Wakefield’s opener is now scheduled for Monday against Lexington and it is questionable whether the Warriors will be able to play at that time.

But despite the field and court conditions facing most squads and schools due to the high amount of snow this past winter, the Warriors are forging ahead with the hope of improving over the course of the season in the always tough Middlesex League.

“Last year was a great season,” said Coach Cheryl Connors, in her seventh year. “That was the best we’ve done since I’ve been here. But with our top two singles players gone, this is going to be more a building year. It is going to be a challenge.”

Wakefield posted a 6-10 record a year ago and was in the hunt for a state tournament until late in the season.

The Warriors will miss first and second singles players Dylan Sellers and Adam Celikmen. Sellers was a Middlesex League Freedom division All-Star a year ago.

Wakefield does have its third singles player from a year ago returning. Adam Hammond, a senior, has moved up and will play at first singles. According to Connors, Hammond has worked hard and improved his game.

The Warriors held challenge matches and playing at the second and third singles spots are Mike Mouradian and James Hanron, a senior and a sophomore. Both played at doubles a year ago.

Wakefield has four more varsity players at the doubles spots but Connors hasn’t determined who is playing at first and who is going to compete at second doubles. The Warriors are still holding their challenge matches to determine the lineup on opening day.

Chris Calnan, a first year senior, played both football and basketball where he excelled in both. Calnan was a M.L. Freedom division all-star in basketball.

“He is quick on his feet,” said Connors.

Joining Calnan will be returning players Noah Sellers and Zachary Covelle. Both are sophomores.

A new sophomore, Soren Helhoski, has won a varsity position and will be one of the quartet of players at doubles.

There are 10 more players that are currently playing JV. Some of those players could move up to varsity if needed.

Matt Yirrell is a first year senior who was on the football and wrestling team.

The returning juniors include Akash Altman, Kevin Manning and Ben Wright. Two first year juniors on the team are Andrew DeCecca and Matt Hoenig. DeCecca also played soccer for the Warriors this past fall.

The lone sophomore on the roster is Andy DiCarlo. He is new to the squad.

There are three incoming freshmen and a couple of them are new to the sport. So it could take some time for them to become acclimated to the sport. They are Ryan McCormack, Max South and Kevin Tran.

With Wakefield’s match against Woburn postponed, the season opener is now Monday against Lexington at the Dobbins Courts. The Warriors then face Reading as they open up with two very tough opponents.

“We have practiced indoors at the Boston Sports Club and at the Woburn Racquet Club,” said Connors. “We only get one court and have to split the time among all the boys. All we can do is work on our conditioning. We’re hoping to get outside and the weather to get warmer.”

While Connors expects teams like Reading and Lexington to be strong in the M.L. Liberty division, she knows that the Freedom division that Wakefield is in tough as well with teams like Burlington and Melrose.

“This will be a building year for us, although several players are better and have improved,” said Connors. “We lost our top two singles players but Adam got better as well and I’m expecting big things from him. So you never know.”