Warriors have one individual, two relays headed to Nationals

FITCHBURG — Just getting to the All-State meet was quite an accomplishment for the athletes of the Warrior boys’ track team. Not only did Wakefield have 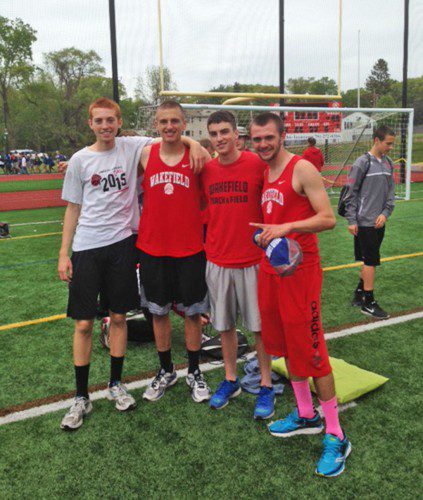 THE 4×400 relay competed in the All-State Meet and finished in 14th place with a time of 3:27.47. The four runners (left to right) were Ian Ritchie, Joe Hurton, Cam Yasi and Jackson Gallagher.

to earn it on the track and in the field but many of the Warriors had to rush just to get to Fitchburg State University on Saturday after the graduation ceremony at WMHS.

While none of the athletes placed and advanced to the New England Meet there were some good performances, however.

“We had several athletes qualify for this past weekend,” said Coach Ruben Reinoso. “Most had to rush out of graduation and go to Fitchburg to compete. In order to make it to all-states you have to be in the top four in your event or top six performances in the state. I am really proud to say that we had several Warriors make it this far, in fact it was the most ever.”

Kevin Russo, a junior, competed in the javelin and took 15th place with a throw of 152-4.

The 4×400 relay, which consisted of seniors Cam Yasi, Joe Hurton, Ritchie and Jackson Gallagher, ran a time of 3:27.47 and was 14th overall.

“Although we didn’t move onto the following week, we are really proud of the accomplishments that boys have done,” said Reinoso. “We were able to capture the first league title since 1973, we broke the 4×400 record, 4×800 record and Ian Ritchie broke the 800 meter record.

“My staff has done an amazing job in turning this program around,” added Reinoso. “Seven years ago we were lucky if we had one athlete qualify for states and this year we have 25. This senior class was also outstanding, they were not only great athletes but they were better people. Now it is on to Nationals for some of the boys.” 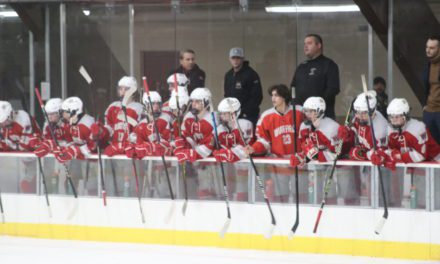