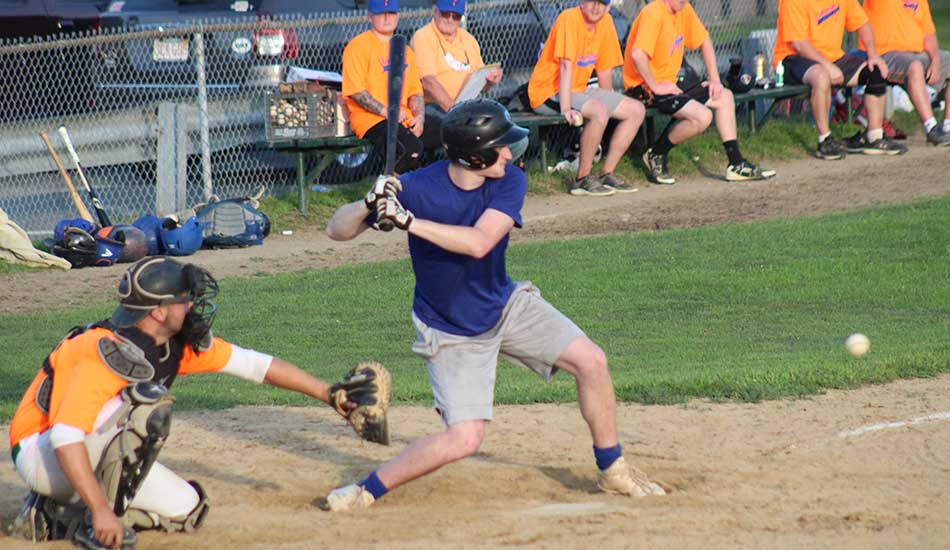 WAKEFIELD — No, there won’t be a box score for this one.

Officially, the Brewers won Game 2 of the Twi League Finals, 15-8.

Whether or not you want to call the following hit totals official is totally up to you. Frankly, it’s the best you’re going to get on a night when the poor plate at Moulton Park was stomped on 23 times.

The Brewers racked up 16 hits and 15 runs batted in while the Unknowns countered with 10 hits and six RBI’s.

The Brew Crew had four players with at least three RBI’s and one more with two. Brendan Casey (3-for-5, 4RBI, HR) led the charge, coming up a triple shy of the cycle. His three-run homer came during the Brewers’ nine-run 4th inning that broke the game open. It was the second dinger in as many days for Casey.

The Unknowns didn’t leave the field without making a mark. They had seven players collect a hit, led by Kevin Murray (2-for-4, 3RBI), Brett Maloney (2-for-4, RBI) and Bryan Butt (2-for-4, RBI). Three of those hits came in the bottom of the 7th with the game all but decided. The Unknowns put up five runs in the final half inning, making a statement of their own that this series was truly even.

The game actually started out pretty slow (or fast, depending on how you view time in baseball) as it was scoreless through 2.5 innings. The fact that the 23 runs were tallied over just a 4.5 inning span – well, that’s the Twi.

It was the Unknowns who drew first blood with a three-run 3rd inning thanks to a sac fly from Bobby Pearl, an RBI double from Maloney and an RBI single from Murray.

Rather than cause panic in staring down a potential 2-0 deficit in the five-game series, those three runs snapped something awake for a sleepy Brewer offense who had accounted for only one run (a Casey solo shot in Game 1) in the first 10 innings of the Finals.

Matt Fiore, who joined Casey with having multiple hits in the inning, led off the nine-run 4th with a base hit. Casey followed with an RBI double – a gapper to right-center. The ball ran for a while and so did Fiore, scoring from first to put the Brew Crew on the board.

A wild pitch from Unknowns starter Tom Caron put Casey on third and Halsey hit a sac fly to make it 3-2. Caron got Mike Fiore to fly out but the Brewers started up an epic two-out rally as Chris Coombs and Mike Greer both singled, knocking out Caron and bringing in Maloney to face Leahy who came through with a double to score both and give the Brewers a lead they wouldn’t relinquish.

Jaena swung out of his shoes on the next pitch from Maloney, prompting a funny “swing harder” call from his bench. Jaena, whose only speed works well for the Brewers, hit one off the end of his bat that blooped in to score Leahy. Jaena stole second and took third when the throw down went into center field. Zagaria followed up with an RBI single to make it 6-3.

That brought up Casey, the game still certainly in reach for the Unknowns who, if you can believe it, still only needed just one more out. Casey’s blast was in a similar spot as his first of the series on Sunday – expect this one was even more towering. It smashed a tree well above the fence in left and somehow fell back onto the field of play, prompting a token argument from the Unknowns coaches who claimed it should be a ground rule double. It wasn’t. You’d be hard-pressed to find a more legitimate homer. Even center fielder Brandon Panarese tipped the cap during the disagreement.

The Brewers were happy but not satisfied with their nine-run 4th, as evidenced by their six-run 5th.

The Unknowns sent rookie Chris Power to the mound who struggled to find the zone, walking Mike Fiore, Greer and Leahy to load the bags. Jaena drove two home on a base hit. He wanted a double but had to backtrack thanks to a “don’t lap him!” call from his bench as Leahy slowed up rounding second while reading to see if Greer would go home on the play which he ultimately did for an 11-3 lead.

That set up Zagaria who came through again with a two-RBI double that knocked Power out of the game. After Matt Fiore walked, Casey singled, setting up Halsey whose base hit brought around two more.

Brewers starter Chris Casey gutted out a complete game. He kept the Unknowns off the board in five of his seven innings pitched. In a more standard game, he would have likely been pulled before or during the Unknown’s 7th inning rally. Sacrificing his stat line, the righty succeeded in keeping other Brewer arms fresh for the rest of the series.

Speaking of rest, the two teams will get tonight to recover for a critical Game 3 on Wednesday night, 5:30 back at Moulton.