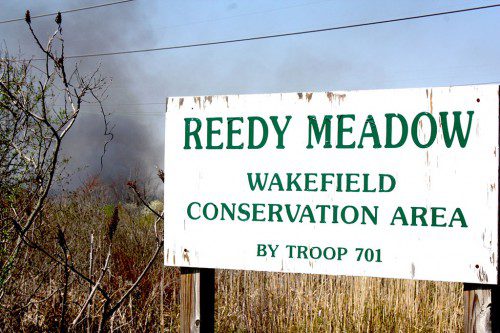 By MAUREEN DOHERTY and BOB BURGESS

LYNNFIELD — A wind-whipped, five-alarm brush fire over about 65 acres of Reedy Meadow yesterday afternoon brought crews from at least 11 departments, including Wakefield, to try to put the flames out. The remoteness of the area made for a tough fire fight.

The crew from Wakefield’s Engine 1 — Lt. John Mercurio and firefighters Marnie Sheeran and Daniel Hancock — were originally asked to cover Lynnfield’s South Station on Salem Street around 12:40 p.m. In route, they were redirected to the staging area on Heritage Lane, directly across Main Street from the Partridge Island Trail that leads out to the marsh.

The Wakefield crew joined those from Lynnfield, Swampscott, Danvers, Lynn, Saugus, Peabody, Salem, Reading, North Reading and the state Forestry Division in battling the flames, which got as high as 20 to 25 feet in some areas.

Wind coming from the south, while helping to fan the blaze, also did much to keep flames from spreading across the abandoned freight rail road tracks cutting through the meadow. If that had happened, according to Wakefield Fire Chief Michael Sullivan, hundreds of acres of the meadow would have been in jeopardy, stretching possibly as far as Audubon Road and MarketStreet Lynnfield.

The only structure that burned was the observation tower at the end of Partridge Island Trail. According to fire officials, the state Fire Marshal has been contacted because the fire’s origins are not believed to be spontaneous.

At one point during the six and a half hour battle, which at times would see flames almost out only to flare up again in the wind, Wakefield’s Engine 1 crew went to the end of Partridge Lane not far from the Wakefield line to help a North Reading crew keep flames from reaching the backyards of homes there. Flames did come to within about 100 yards of those properties, however.

Sullivan said, “The terrain out there is really treacherous. It’s wet, it’s mucky and you’re surrounded by cat-o’-nine-tails. One firefighter from the Forestry service was on the railroad tracks and took one step and was up to his chest in water. It’s so remote. You’re constantly chasing fire across the cat-o’-nine-tails. It is not a straight forward fire fight out there.”

The Engine 1 crew was released just after 4 p.m. but, because of a flare-up, the crew was back in Lynnfield from about 5:45 p.m. to a little after 7 p.m. covering at the town’s South Station.

The last company involved in battling the brush fire was cleared to return to quarters at 7:05 p.m.