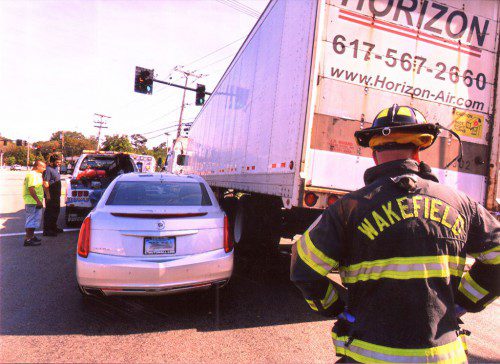 TRAFFIC was snarled Saturday afternoon, Aug. 27, at the 3-way intersection at the end of the Salem Street exit off Rte. 128 when the driver of a tractor-trailer truck apparently swerved to the right, nearly going onto the sidewalk to avoid a collision with the driver of a silver sedan registered in Connecticut. (Don Young Photos)

WAKEFIELD — Police, the Fire Department and Action Ambulance responded to Salem Street at the Route 128 Exit 42 off ramp after an accident occurred between a 2013 Cadillac XTS and a 2016 tractor trailer.

Both vehicles were making a left onto Salem Street from the off ramp when they collided and a wheel of the tractor trailer ended up on top of one of the wheels of the Cadillac, pinning the car under the trailer. The driver of the Cadillac was able to get out of the car but the female passenger was trapped and was unable to get out.

Firefighters stabilized the tractor trailer unit with rescue jacks and were able to extricate the woman from the car. Neither occupant of the Cadillac was injured but the car had to be towed from the scene.

The truck driver was cited for a marked lanes violation.