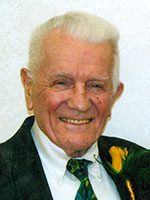 WAKEFIELD — Carlton E. Elliott, 93, a lifelong resident of Wakefield, died Saturday, March 7, at the Sawtelle Family Hospice House in Reading.
Born in Richmond, Maine, April 20, 1921, he was the son of the late Fred V.T. and Mabel (Bellows) Elliott.
Carlton was a graduate of Wakefield High School, Class of 1940. He was an active member of the First Parish Congregational Church where he was a member for 50 years.
A mechanical engineer by trade, Carlton worked for various companies in the area including, Polaroid, Sylvania, Raytheon and many others. He was a 70-year member of the Independent Order of Odd Fellows, Past Grand of Souhegan Lodge #38 and was currently a member of the Everett Lodge #37. He was a charter member of the Skibees of Wakefield.
Carlton is survived by his wife Eleanor (Miller) Elliott; his three sons, Robert Elliott and his wife Bonnie of Germany, Brian Elliot of Wakefield, Dana Elliott of Haverhill, and his brother Richard Elliott of Bedford. He is also survived by his two grandchildren, Thaddeaus and Yvonne. Carlton was preceded in death by his siblings Irving Elliott, Dorothy Darci, Esther Elliott and his twin brother Carl Elliott.
The funeral service will be held at the McDonald Funeral Home, 19 Yale Ave., Wakefield on Friday at noon Visitation for relatives and friends will be held at the funeral home on Friday morning prior to the service from 10:30 a.m. to noon.
Interment will be held at Forest Glade Cemetery in Wakefield.