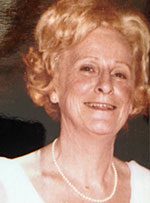 WAKEFIELD — Dorothy McGrail Hagan, 95, of Wakefield, died February 26 in North Carolina.
She was born in Wakefield on June 4, 1919 and was the daughter of the late Richard F. and Anna A. (Boland) McGrail. Mrs. Hagan was raised in Wakefield and was a graduate of Wakefield High School, Class of 1937, and later from the Malden Commercial Business School.
She was retired from the Town of Wakefield’s Police Department where she served as secretary for many years.
Mrs. Hagan was the beloved wife of the late Joseph A. Hagan. She is survived by her son Col. Mark J. Hagan, U.S. Army (Ret) and his wife Kimberly of Elgin, SC. She is also survived by her two loving grandchildren, Emily Ann and Wesley C. Hagan. She is predeceased by her brother Richard McGrail and her sister Ann Santa Maria.
Her funeral will be held from the McDonald Funeral Home, 19 Yale Ave., Wakefield, Saturday, March 14, at 9 a.m. followed by a funeral Mass in St. Joseph Church, 173 Albion St., Wakefield, at 10 a.m.
Interment will be at St. Patrick Cemetery in Stoneham.
Visitation for relatives and friends will be held at the funeral home Friday from 4 p.m. to 8 p.m.