WAKEFIELD — The defending Wakefield Twi-League Champs, The Unknowns squeaked out a 1-0 victory over the Loafers, Thursday night at Moulton 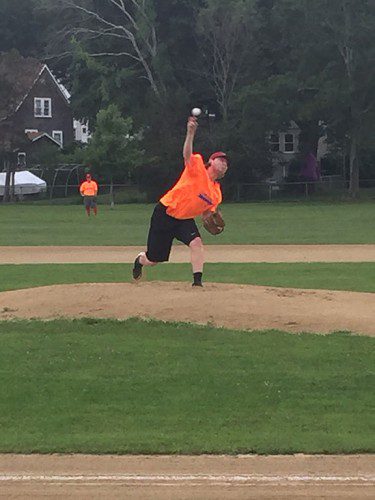 ADAM CHANLEY stole the show at Moulton Park on Thursday as the Unknowns beat the Loafers 1-0. Chanley pitched a complete-game two-hitter while striking out five for the Unknowns.

Loafer’s hurler Taylor Robinson was up to the task as well, allowing four hits and one run. Matt Smith was the offensive dynamo for the Loaf, getting both hits off Chanley.

The Orange scored the only run of the game in the bottom of the fourth inning. Geoff Eriksen led off with a single that clanged off a tree in right field. Graham Robertson forced Eriksen out at second on an infield ground ball. Chad Dwyer then lined a hit to right field, moving Robertson to third base. Dwyer then stole second base to make it runners on second and third. Panarese then chopped a ball up the middle that the Loafer shortstop retrieved and threw home to try to get Robertson, who beat the throw for the first run of the game. Kevin Murray followed with a scorching low line drive to second base where Alex Jancy scooped it up and rifled a perfect throw to home to nab Dwyer trying to score from third base.

Chanley was in a groove through the middle of the game, but it was Panarese’s highlight running catch, during the sixth inning, in right center field off the bat of Matt Russo that probably saved a run or two for the Unknowns.

In the top of the seventh inning, Chanley got the first two batters out, before Smith beat out an infield hit. The Loafers were still in the hunt, looking to tie up the game with the speedy Smith on first. The hard hitting pitcher Robinson sliced a drive down the right field line with Smith on the go, but Alexander gave an all out sprint to track the ball down to save the win for Chanley and keep the Unknowns playoff chances alive. The Loafers and Unknowns will meet again this Thursday night, 5:45 p.m. at Moulton.