Member of the Candy Hall of Fame 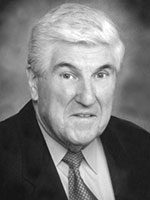 Born in Medford, on Sept. 28, 1924, he was the son of the late James L. and Mary (Moriarty) Reagan. He was a graduate of Somerville High School and Burdett School of Business in Boston. Charles was a U.S. Navy Veteran of World War II and the Korean Conflict. He served from 1942 to 1946 and re–enlisted in 1947 and served until 1951.

Charles was self employed business owner. He was a Candy Broker and owned and operated Stockdale and Reagan, Inc. for 43 years. He was well known as the “Candyman” and was inducted in the Candy Hall of Fame in Hersey, Pa. in 2002. He has been a resident North Reading for 57 years and was a member of St. Theresa Church.

He loved to tell stories about the Navy. He loved his family with a passion. He enjoyed his work and parties with friends. He enjoyed taking movies of the family growing up and kept meticulous photo albums. He liked reading about World War II, the Civil War and the History Channel. Charles loved traveling, cruising and his trip to Ireland. He keep memories alive of his cousin Francis, who died in World War II and all his beloved family and friends, that passed before him.

His funeral will be held from the Croswell Funeral Home, 19 Bow St., North Reading on Thursday, April 30 at 9 a.m., followed by a 10:30 a.m. funeral Mass at St. Theresa Church, 63 Winter St. (Rt. 62), North Reading.  Burial will be in Riverside Cemetery in North Reading. Memorial donations may be made in his memory to: Wounded Warrior Project, www.woundedwarriorproject.com.