D-Day veteran was a Boston educator 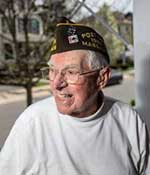 Bob was born in Boston on April 28, 1922 to John and Mary (Goodwin) Fuller. He was raised in Dorchester and graduated from Boston College High School. He later earned a master’s degree from Boston State College.

At the age of 21, Bob enlisted in the United States Army and went on to serve his country honorably during World War II. He was a D-Day veteran and fought in northern France, the Rhineland and central Europe. Bob was very proud of his service and continued his connection to the military by being an active member of the Lt. Norman Prince Post 1506 VFW in Melrose. The club was very important to him, he played cards down there every Thursday and enjoyed being with fellow veterans.

Bob worked as a meat cutter at Roxie’s Butcher Shop in Quincy for many years. He eventually went on to become a teacher and later a principal in the Boston Public School system.

Bob was also known by the nicknames “Teach” and “Papa.”

He loved to travel, particularly by taking car rides. Bob and his wife Margery, along with other family members, took many rides up Rt. 1 on a beautiful day for a lobster roll. He would also take an annual trip with his boys to see the Red Sox play at a different stadium. He was an avid Red Sox and Patriot fan, rarely missing a game.

Most importantly, Bob was a man who cherished his family. He loved spending time with them any way he could. He will be greatly missed by all who had the privilege to know him.

Interment at the Bourne National Cemetery.

To leave an online message of condolence please visit gatelyfh.com.