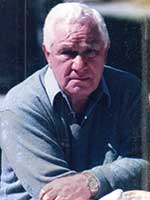 READING — Charles S. Scimone, 83, passed away at the Sawtelle Hospice House in Reading on December 17.

Charles was born in Boston on December 24, 1932 to the late Joseph and Carmella (Trainito) Scimone. He was raised in East Boston, graduated East Boston High School and has been a resident of Melrose since 1963.

Mr. Scimone worked as a division manager for Sears in the Burlington and Woburn stores for 38 years.

Charles was also a longtime member of Incarnation Church in Melrose.

He was the husband of Margaret (Marchesi) Scimone. He was the father of Janice Clunan of Woodstock, VT and Charles Scimone and his wife Carol Krajnik of Breman, Maine. He was the grandfather of Patrick, Matthew, Ryan and Polina. He was the brother of the late Frank, Gaspar, Tina, Joe, Ann and James.

Visitation will be held at Incarnation Church, 425 Upham St., Melrose on Saturday, January 7, from 10 a.m. to 11 a.m., followed by a Mass of Christian Burial at 11 a.m. Relatives and friends are respectfully invited to attend.

Interment will be private. Arrangements by Gately Funeral Home, Melrose.