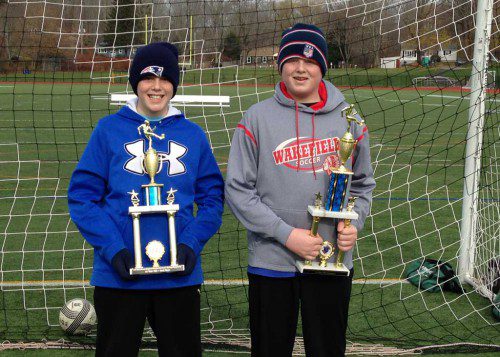 WAKEFIELD K of C, Council #104, had two boys win trophies at the State Soccer Finals at Nichols College in Dudley. From left to right are Logan Cosgrove and Liam Cosgrove.

DUDLEY — The Wakefield Knights of Columbus, Council #104, had two brothers competing in the K of C State Championship Soccer Finals on Sunday, Nov. 15 at Nichols College in Dudley.

Winning the 13-year-old boys competition was Liam Cosgrove and finishing second in the 12-year-old division was Logan Cosgrove. This is the second straight year that Liam has won the title, and as an 11-year-old, he finished in second place.

Another Wakefield boy, William Townshend had also won the state title for two consecutive years but he was unable to attend this year after qualifying for the final. Wakefield has had a state champ in all eight years of the competition.