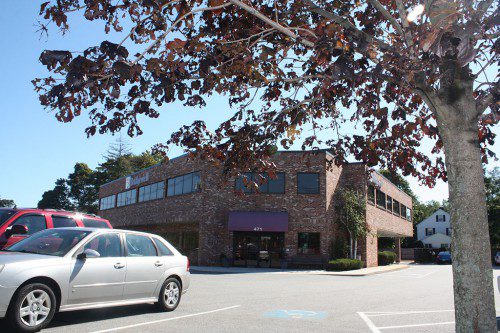 BRIDGEWELL has announced it will not sell its property on the corner of Broadway and Salem Street to CVS Pharmacy and has withdrawn a citizens’ petition to rezone a portion of the site. Instead, the company will pursue uses that are allowed by right in the limited business zone. (Maureen Doherty Photo)

LYNNFIELD — In a surprising turn of events, CVS representatives withdrew a warrant article seeking a zoning change that was set to appear on the Town Meeting warrant.

Town Meeting voters were scheduled to vote on a citizens’ petition seeking to rezone a portion of the Bridgewell property at 834 Salem St. from Residence A to Limited Business to allow CVS to construct its first pharmacy in Lynnfield. The Bridgewell properties at 471 and 495 Broadway would remain in the local business zoning district under this plan.

Local attorney Jay Kimball informed the Villager last Friday that his son Jason, who is also an attorney, appeared at last Friday morning’s Board of Selectmen meeting to formally announce CVS was withdrawing the warrant article the company submitted earlier this summer. He said CVS decided to withdraw the warrant article because of the opposition voiced from residents and local officials. The selectmen met Friday morning in order to vote to close the warrant for the Oct. 19 Town Meeting.

“CVS decided to withdraw the article because they know the neighbors are not in favor of the project and they want to honor that,” said Kimball. “They see no benefit of it going forward.”

In an e-mail, CVS Public Relations Director Mike DeAngelis commented, “We have made the decision to take a step back from the town of Lynnfield’s permitting process. We are conducting a thorough evaluation of our options in this matter and have no additional comment at this time.”

CVS purchased the Bridgewell property last winter and held three informational meetings about the project with abutters at the Holiday Inn in Peabody. Many abutters opposed the project because of traffic concerns, their fear of decreased property values and concerns a CVS would bring nefarious activity into Lynnfield.

In the wake of citizen opposition at the first two public forums about the project, CVS revealed at the third forum the elimination of the drive-thru pharmacy window as well as a reduced building footprint by about 1,100 square feet and agreed to restrict delivery truck access and egress.

Additionally, CVS scrapped the project’s original design after opponents called it a “cookie cutter” design. In the new design, CVS incorporated Colonial style architectural materials and colors into the building’s façade such as clapboards, window shutters and roof shingles to help the pharmacy blend in with the residential neighborhood.

Despite those changes, the majority of the proposed CVS’ abutters still opposed the project.

In addition to failing to win over the project’s abutters, the CVS plan also failed to win support from local officials. While the Board of Selectmen did not take a formal vote on the project, all three selectmen went on the record stating their opposition to the project. The Planning Board voted 4-0 to not recommend the warrant article at Town Meeting last month. Planning Board member Randall Crompton was absent at that meeting.

“We are selling the building,” said Everest. “We will secure a buyer who will not need to get special variances from the town. We believed CVS would be a good neighbor and amenity for the neighborhood, but the neighbors opposed the project.”