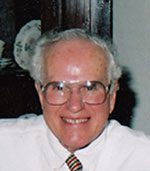 He was born in Melrose on Sept. 15, 1927 to Ralph and Frances (Mutty) Pierce. Dana served honorably during World War II in the Army 12th Calvary Division and was part of the occupation force in Japan at the conclusion of the war. After the war, Dana chose to continue his education. He attended Boston College and graduated with high honors. He was a gifted writer and also studied French, Latin and Classical Greek. He was truly quite the scholar and never lost his thirst for knowledge.

During the 1960s, Dana worked for the NASA office in Cambridge as the Chief of Documentation. He later retired from the firm Arthur D. Little in Cambridge, where he worked as a technical editor and writer. Dana also did some private consulting for people, helping them with their theses as they worked toward their doctorate degrees. In his spare time he even wrote a genealogy of the Pierce family going all the way back to the 1600s. He could write or edit anything.

Most importantly, Dana loved his wife Theresa, the two spent many wonderful years together. They had a boat in Gloucester, where they would spend many hours out on the sea together. Dana was also the commander of the Gloucester Power Squadron for some time and he also worked for them as navigator. In addition to boating, he also enjoyed hiking in the White Mountains of New Hampshire. He was a remarkable man who will be greatly missed by all who had the privilege to know him.

Dana was the beloved husband of Theresa J. (Magras) Pierce. He was the caring brother of Estelle Van Sant of Calgary; Priscilla McNally of Norwood; Fr. John Pierce OFM of Butler, N.J. and the late Ralph Pierce Jr. and the late Miriam Scully. He was the loving uncle of 22 nieces and nephews. He is also survived by many great nieces and great nephews.