Derendal qualifies for nationals in the javelin

Warriors have many good performances in Woburn makeup 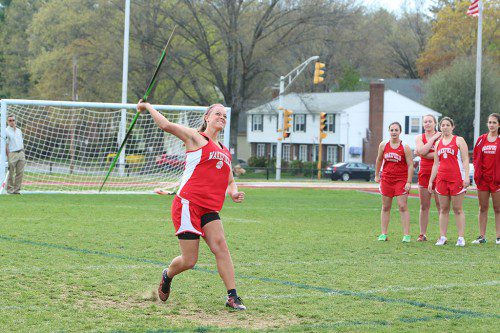 JULIA DERENDAL qualified for nationals in the javelin with a throw of 110-8 in Wakefield’s makeup meet against Woburn. She came in first in the event. (Donna Larsson File Photo)

WAKEFIELD — With the Middlesex League Freedom division and Liberty division schedules completed, the Wakefield Memorial High and Woburn High girls’ track teams used yesterday’s makeup at the Beasley Track and Field facility as more of an invitational meet for the athletes in attendance to better their performances.

The meet didn’t count in the standings and no score was kept. Wakefield finished the dual meet season with a 4-1 record and came in second in the M.L. Freedom division.

Warrior junior Julia Derendal had quite a meet as she won the javelin with a throw of 110-8 which qualified for nationals. Derendal’s previous best was 102-2 1/2 which she accomplished on Sunday.

“The meet today was used as an invitational to get a personal record, qualify for states or qualify for nationals. The highlight of the meet was Julia Derendal who won the javelin with a 110-8 qualifying her for nationals,” said Coach Karen Barrett. “Her previous best was 102-2 1/2. Julia just started throwing this season. She has worked really hard and I am so happy for her success.”

Abby Harrington, a sophomore, ran a time of 69.1 seconds in the 400 hurdles. That was a personal best and will move her up in the state seedings.

“I was extremely impressed with her performance today,” said Barrett.

Senior Jill Raso was first in the high jump tying her personal best of 4-11.

Derendal was second in the discus with a personal best throw of 81-0, sophomore Alex Rollins was third in the javelin with a distance 86-8.

Harrington won the long jump with a distance of 15-2 1/2 with junior Jill Cataldo taking second with a leap of 14-9.

“For most of my distance runners I let them run something different if they already qualified for states,” said Barrett. “We will now be practicing for the state meet which will be held at Durfee High this Sunday at 1 p.m.”