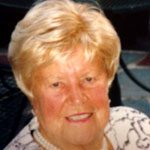 Born in Minneapolis, Minn. on Dec. 22, 1917, she was the daughter of the late Francis and Edith (Haines) Legro.

She was the wife of the late Leo H. O’Connor. Mrs. O’Connor is survived by her three daughters, Linda Camuso and her husband Stephen of Lynnfield; Cheryl Hawkins and her husband Keith of Skaneateles, N.Y.; and Andrea Bruno of Lynnfield and her late husband Joseph Bruno; and her son, Michael O’Connor and his partner Brenda Harding of Wenham. She is also survived by seven grandchildren, Scott, Jill, Michael, Kristen, A.J., Alex and Greg and four great-grandchildren.

Her funeral was held from McDonald Funeral Home, 19 Yale Ave., Wakefield on Saturday morning, Oct. 11 followed by a funeral Mass at St. Maria Goretti Church, 125 Chestnut St., Lynnfield. Visitation for relatives and friends was held at the funeral home on Friday. Interment was in St. Joseph Cemetery, Lynn.