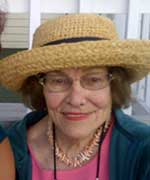 Mrs. Morrissey was a resident of Dennis for 20 years before moving to Lynnfield in 2007. She was raised in Rhode Island and was a 1942 graduate of St. Xavier Academy in Providence, R.I. She received a bachelor’s degree in elementary education from Rhode Island College in 1946. She worked as an elementary school teacher in Smithfield, R.I. and as a substitute teacher in Cherry Hill, N.J. for 16 years. She was a member of the Red Hat Society in Dennis.

Back in the day, Mrs. Morrissey rolled bandages in World War II and volunteered at the U.S.O. in Providence. After her marriage to John, there were numerous moves around the country because of his job transfers with pharmaceutical and chemical companies. They ultimately settled in Cherry Hill, N.J. for 20 years after John became president of his own corporation. She taught CCD at her local parish and served as vice president of the parish council. She was also the chairperson of the CCD program.

Eileen loved gardening, quilting and cooking. She and John were a pleasure to watch as they waltzed on the dance floor at weddings. Her life can be best summarized as one of total dedication to the care of her family. Being involved in the activities of her children and grandchildren will keep her in their hearts forever.

Mrs. Morrissey was the beloved wife of John P. Morrissey. She was the loving mother of Shaun Morrissey of Nashua, N.H. and Jill Drury, his wife; Eileen E. Morrissey of Millstone, N.J.; Deidre Lamusta of Lynnfield, and Terrence Morrissey of Moorestown, N.J. and his wife Susan. She leaves behind her eight beloved grandchildren, Meghan, Patrick, Bridget, Tim, Russell, Erin, Shannon and Colin, as well as a great-granddaughter, Lily.

A memorial Mass will be held on Saturday, Aug. 20 at 10:30 a.m. at St. Adelaide’s Roman Catholic Church in Peabody. Arrangements are in the care of the McDonald Funeral Home, Wakefield.