Manager of Information Systems at town hall for many years 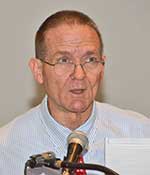 Born in Columbus, Nebraska, on August 12, 1945, he was the son of the late Stanley A., Sr. and Mary S. (Teterus) Tworek. He attended Elementary School at St. Stanislaus School in Duncan, NE and was a graduate of St. Bonaventure High School in Columbus, NE. He was a Regents Scholar at the University of Nebraska, where he studied Mathematics and was a Scholarship Recipient at Merrimack College, where he studied Computer Programming Languages. He also attended the University of Lowell, studying Logic and Design, Math and Marketing.

Gene was a U.S. Army Veteran of the Vietnam Conflict, he was a SP5 and served from 1967 to 1969. He was a Manager of Information Systems for the Town of North Reading for many years. He was an active member of St. Michael Parish in North Andover and served as a Lector. Gene was a 4-H volunteer and served a term as President of the Massachusetts 4-H Council and a volunteer at the Lazarus House Homeless Shelter in Lawrence.

Gene had a gentle spirit, he loved everyone and was universally loved. Gene was a kind caring individual, he took pride in his work at a 100 percent. He was a true old fashioned gentleman and enjoyed duck hunting in his earlier years. Gene enjoyed running, nature walks and he loved the outdoors. He was an avid Patriot’s Fan, he spoke highly of the military and was an airplane enthusiast. He especially loved the farm he grew up on in Nebraska.