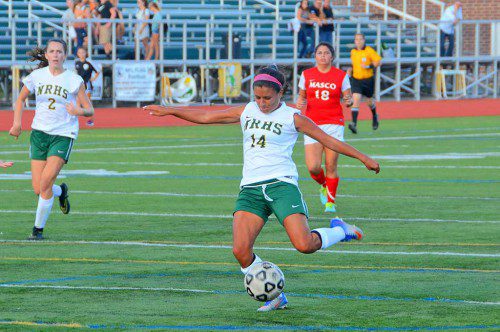 NORTH READING — With a solid core of returning players from the historic 2015 squad that became the first girls’ soccer team in NRHS history to capture the Division 3 North Sectional title and make it to the state semifinals, expectations for the 2016 Lady Hornets are high.

Coming off a 2015 season in which she was named Cape Ann League MVP, an Eastern Mass All-Star, earned All-State honors and was named an All-Scholastic by the Boston Globe, senior captain Katerina Hassapis returns in net. Along with Hassapis in goal, the defensive back line of fellow seniors Giana Moscaritolo, Jessica Muise and junior Kirsten Bradley returns and should be stingy again this season.

According to head coach Sean Killeen, the biggest holes to fill this season have been in the midfield but returning senior Haley Nathan and juniors Meredith Griffin and Jerlin Kaithamattam will control possession. The team will also welcome back junior Kristina Copelas in the central midfield. After making the varsity as a freshman, and two significant knee injuries later, Copelas has finally returned to field healthy. 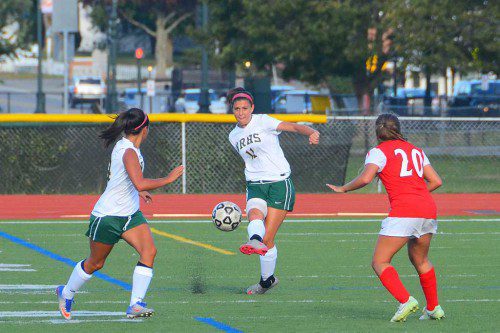 They also have a balanced scoring attack returning in senior Marissa Zarella, juniors Rachel Hill, Juliette Nadeau, and Karlie Vesey that can create and finish opportunities.

Killeen, who is the two–time defending Division 3 Coach of the Year, said, “Our expectations are high with 12 returning varsity players. Every player has committed to working hard and although we have performed well in the tournament we are hoping to win the Cape Ann League this season.”

With so much talent the Hornets should have no problem competing for the CAL Kinney Division title.

The Masconomet Chieftains spoiled the Hornets’ home opener with their 3–0 victory on Friday afternoon.

The Chieftains controlled possession in the first half. In the 30th minute Masco was rewarded with a goal. On the play the North Reading defender stumbled in the box trying defend a cross and a Masco player put the ball into the open net. Masco took a 1–0 lead into the half.

The Chieftains added two more scores in the second half and went on to victory.