Take Game 1 with 8-4 triumph over Brewers 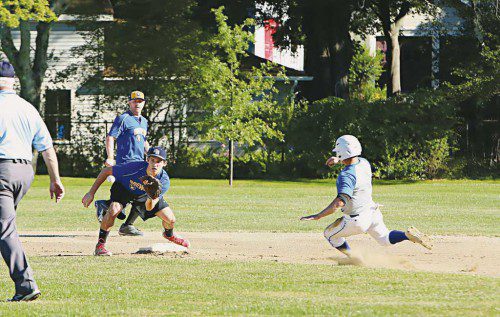 WAKEFIELD — The Twi League playoff finals began last night and the Expos took the first game against the Brewers by an 8-4 score at Moulton Field to take a 1-0 lead in the best-of-five series.

The Brewers jumped out to an early lead in the top of the second inning. Brian DiRuzza led off with a single to right and then Mike Greer drew a walk. Tom Leahy reached on a fielder’s choice that forced DiRuzza at third. A tough hop that got by third baseman John Grossi allowed Greer to score to make it 1-0 in the Brewers favor. But John Richards retired the next two batters.

The Brewers lead did not last long, however. Dave McDonald and Tom Kelleher opened the home half of the inning with singles. Mike Cannata followed with a single to left that scored McDonald to tie the game at 1-1. Richards hit a ball to right that Cannata was unsure would be caught, allowing right fielder Greer to throw to second for a force on Cannata. After a pop up to short, Jason Brooks singled in Kelleher with the go-ahead run before a fly ball to center ended the inning with the Expos leading 2-1.

The fourth inning saw the Expos extend their lead by one more run. Cannata led off and reached on a dropped third strike while swinging and then was sacrificed over by Richards. Dennis Diccico drew a walk and then Brooks reached on a fielder’s choice with Cannata being forced out at third. Grossi singled to center to bring in Diccico and put the Expos up 3-1 but that would be all of the scoring in the inning.

The Brewers scratched out another run in the top of the fifth. Joe Greer led off with a single to left and then Matt Byrne drew a walk. Andrew Patti reached on an error to load the bases and Matt Fiore also followed by reaching on an error that allowed Greer to score and make it 3-2. But Expos pitcher Richards struck out the next two batters to end the inning.

Three more runs in the bottom of the fifth inning gave the Expos some breathing room.

Dave McDonald led off with a single but was erased at second on a fielder’s choice by Kelleher. Cannata doubled down the left field line to put runners at second and third. Richards reached on an error that loaded the bases. Dicicco reached on a fielder’s choice with Kelleher being forced out at home plate. Brooks then doubled to center, just beyond the dive of Mike Coombs to clear the bases and boost the Expos lead to 6-2.

The Expos managed to reload the bases in the fifth but were unable to score any more runs.

The Expos added two more runs in the bottom of the sixth. With one out, Kelleher reached on an infield single. Cannata followed with a triple to left that scored Kelleher.  Richards grounded out to second but that scored Cannata to make it 8-2.

The Brewers managed to plate two runs in the top of the seventh. Fiore singled with one out and Darren Bisso followed with a walk. DiRuzza then singled down the right field line to score Fiore. Mike Greer singled in Bisso to make it 8-4 where it would stand.

The two teams will play each other again tonight at 5:30 p.m. in Game 2 of the best-of-five series at Moulton Field.