Burlington gives Melrose a devil of a time in 9 innings 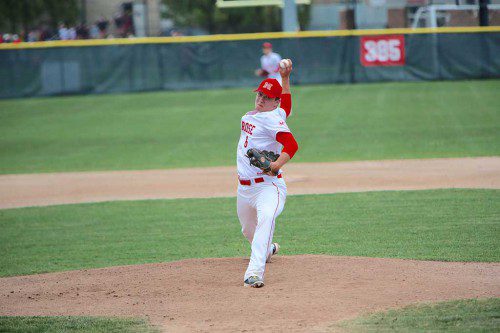 JUSTIN McCARTHY went 9 innings for the Melrose Red Raider baseball team, who fell 2-1 in extra innings against Burlington in the opening round of D2N playoffs. (Donna Larsson photo)

MELROSE—It was a post season pitchers’ duel between Melrose’s Justin McCarthy and Burlington’s Evan Camilleri in the opening round of the Div. 2 North baseball playoffs on Thursday, June 2; one that extended into the 9th inning and ended in heartbreak as the 9th seeded Red Raiders fell to 10th seed Burlington, 2-1, in front of a packed Morelli Field crowd.

The two teams remained deadlocked at 1-1 going into the ninth and Melrose had secured two outs when Burlington’s bats came around finally on McCarthy, who pitched a very solid outing, allowing just six hits, and throwing 6 strikeouts and one walk in his 9 innings of play.

Burlington’s Camilleri was aided by the go-ahead run by Dillon Ursino in the top of the 9th, someone Melrose couldn’t match at the plate in the bottom of the inning. Camilleri also put the Red Devils on board first during the second inning when he drove in Pat O’Halloran with an RBI single. But Melrose bit back when Ryan Censullo knocked in Stephen Guttadauro with an RBI single in the third, deadlocking the game at 1-1 which would remain for several innings.

It was a chess game for the remainder of the game, with solid defense keeping the game locked, including a key fly to Melrose’s Sean Connolly in the 4th who played the ball shallow enough to ward off Burlington third base runner Pat O’Halloran from scoring on a sac fly. From there, McCarthy fanned Peter Lynch to end the inning and a big scoring threat. At the plate, Melrose’s McCarthy advanced Steve Guttadauro on a single but a Melrose pinch runner was caught in a pickle to end the inning.

It was a strong sixth for Melrose. McCarthy fanned two and Melrose catcher Matt Cornelius tossed out Shane O’Halloran on a steal thanks in part to a clutch grab-n-tag by Melrose shortstop Ryan Censullo. McCarthy ended the inning on another strikeout, keeping the game tied at 1-1. Melrose went down in order in the sixth but held the fort in the seventh when they eliminated a Burlington scoring threat. With two men on second and third, Melrose infielders Max Watson and Ryan Censullo completed ground outs to end the inning.

Melrose failed to capitalize with a man on first in the bottom of the seventh when Evan Camilleri retired Drew McGuire and Nick Cordeau in order, forcing the game into extra innings. In the ninth Burlington’s Camilleri singled to first then advanced on a balk. Ursino then hit a blooper single up the middle that scored Camilleri, who slid past the glove of Melrose’s Cornelius. On the mound Camilleri seemed to be getting only stronger and retired Melrose in the bottom of the ninth to end the game, 2-1.

Melrose should remain competitive next season. Worth noting is a 18-1 JV team and a strong freshman squad.