Scores six goal in a win over Burlington 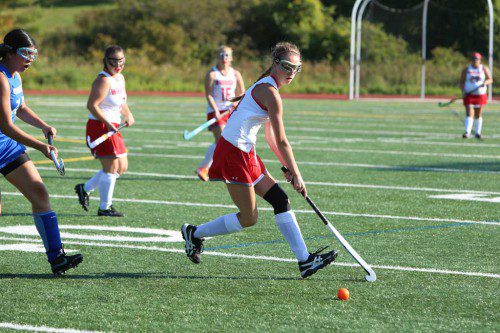 MEG HORRIGAN, a junior midfielder, had a strong game and was able to push the ball up to the forwards on the attack. As a result, the Warriors defeated Burlington by a 6-3 score yesterday at Beasley Field. (Donna Larsson File Photo)

The Wakefield Memorial High field hockey team played one of its better games of the season and posted a 6-3 triumph over Burlington yesterday afternoon at Beasley Field.

The Warriors increased their record to 4-4 overall and 3-4 in the Middlesex League Freedom division.

“Offensively we played well today. (The) Midfield line had nice transitions up to (the) forward line. Meg Horrigan, at center midfield was able to push the ball up to Jill Cataldo who would carry the ball up the sideline going in and out of Burlington’s defense for shots on net,” said Coach Cara Luca. “Julianne Bourque was also moving the ball in and out of Burlington’s defense to pass or shoot on net. We needed this win today. This is what I have been waiting for. I know how much potential my offense has and today they showed it.

“We have Watertown on Wednesday. We need all the fans possible to come cheer on their Warriors,” added Luca. “If we play like we did today I feel confident that we can be successful.”