Field hockey team has a lot of new faces 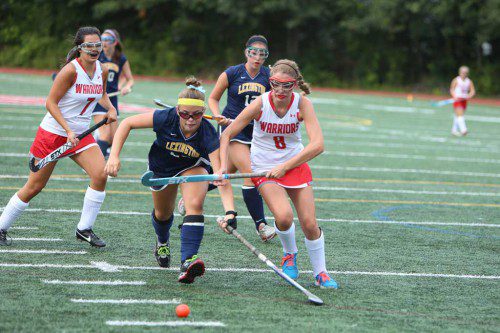 JULIANNE BOURQUE (right) and Jillian Cataldo, both seniors, return to play forward this season for the Warriors. They are two of six returning veterans for a young Wakefield team this fall.
(Donna Larsson File Photo)

WAKEFIELD — The Wakefield Memorial High field hockey team opens its season on the road this week and coach Cara Luca will be relying on a small group of veteran players to lead the way.

The Warriors will be seeking to improve on a 4-12-1 overall record and 4-11-1 mark in the Middlesex League Freedom division.

“We have some things to work on. I only have six returning varsity players,” noted Luca, who enters her fourth year as head coach.

Bourque and Cataldo are forwards. Hudson, Stewart and Horrigan play in the midfield. Kerrigan returns to play defense.

“For the most part I feel confident with these girls. Generally, they’re working together. They all they all share the same values, that you have to work hard in order to be successful. That’s good because we haven’t had that in a while,” said Luca.

Molly Leach, a junior, will take over in goal for the varsity.

“She has some big shoes to fill with Miriam Wood gone.”

Though it is a small group of returning players, they are mostly located up front, which could mean that the team’s strength will be on the offense. Conversely, it could leave the team vulnerable on defense.

“Basically, right now the experience coming back is that I have a solid front line because they’re returning players but Meg Kerrigan is the only returning defensive player. So, our defense has some work to do,” Luca explained.

The rest of the seniors include Danielle Benedetto, Leigh O’Brien and Rachel Tammaro. They are in their first year with the varsity. Benedetto is a forward, while O’Brien and Tammaro will be on defense.

The junior class is the biggest on the roster with nine 11th graders. Kerrigan is the only returning junior while Leach is in her first year in net. The rest of the juniors include Leila Buonfiglio, Briana Cieniewicz, Kimberly Padilla-Oquendo, Jenna Mello, Elena Mouradian, Jillian Surette and Alexis Truesdale.

Buonfiglio, Padilla-Oquendo and Surette are on defense. Cieniewicz, Mello, Mouradian and Truesdale are slated to play the midfield.

There are three sophomores that have made the varsity cut. They are Olivia Cameron, Julianne D’Ambrosio and Vanessa Kaddaras. Cameron and Kaddaras are forwards and D’Ambrosio plays on defense.

Luca will be helped out by assistant coach Maria Kenney.

Luca noted that it might be a wide-open field in the Middlesex League this year although she felt a few teams in particular would be the ones to watch.

“A lot of teams lost a lot of their good seniors so it’s anybody’s league this year. But of course, Watertown as usual (will be tough). (There’s also) Reading and Winchester, who went to Spain for training,” Luca said.

Wakefield opens up the season tomorrow afternoon at 3:30 p.m. when it takes on Lexington on the road at Lincoln Park.