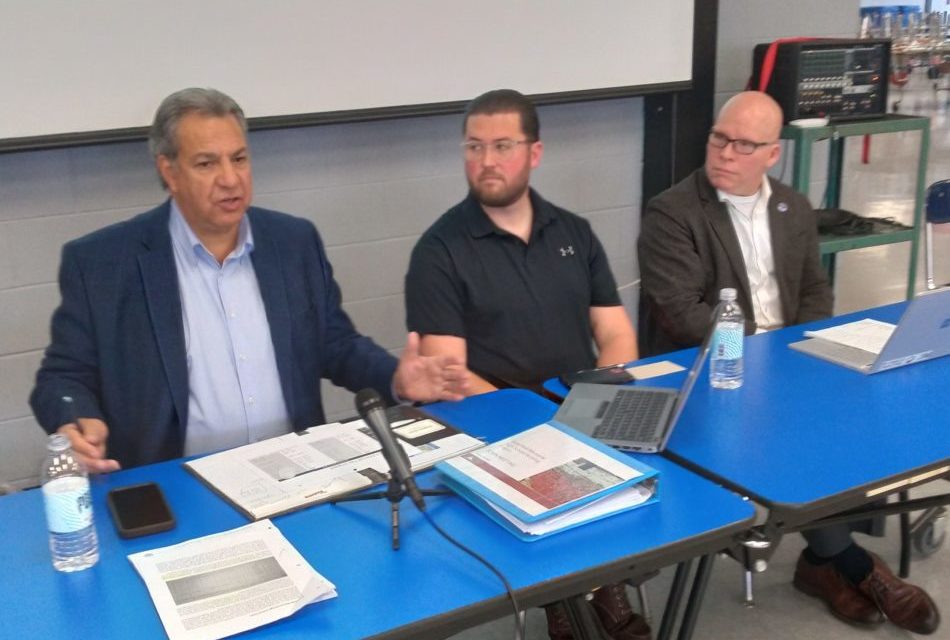 WAKEFIELD – For the last time before the Jan. 28 Special Town Meeting, school and town officials sponsored a tour of the High School on Saturday. An early morning and late morning tour bracketed a presentation and Q & A session by various town and school officials in the cafeteria. About twenty people attended the first tour and cafeteria session.

At issue in the January 28 Special Town Meeting and a ballot question in March is the town’s willingness to fund its share of a new High School, with construction currently scheduled to begin in January 2024 for an opening date three years later. The cost is $273.5 million, which includes $30 million in contingency money, some of which may not be needed. The state School Building Authority will contribute $65 million. The new school will be 259,847 square feet, 9,417 or 3.7% square feet bigger than the current 250,430.

The tour was led by students Sofia Macaluso and Max MacDonald, accompanied by Principal Amy MacLeod and Facilities Director Tom O’Brien, a member of the Class of 2006. They showed people small classrooms and science labs, some of which had blackboards, desks not wide enough to hold a laptop computer, a tiny elevator and water stains on ceilings, among other things. Macaluso said trash barrels are sometimes needed to deal with drips after rain and snow storms. She also said she felt the elevator was too small for two people. The elevators in the building can’t accommodate a wheelchair or hospital gurney.

“There are few flexible spaces because the building was cobbled together,” MacLeod added. “Learning isn’t the way it was. It’s much more hands on. In an updated setting, equipment would be more accessible.”

MacDonald said the long hallways, some of which MacLeod said “go to nowhere,” are choke points for traffic. “Going around corners can be rough,” he said. 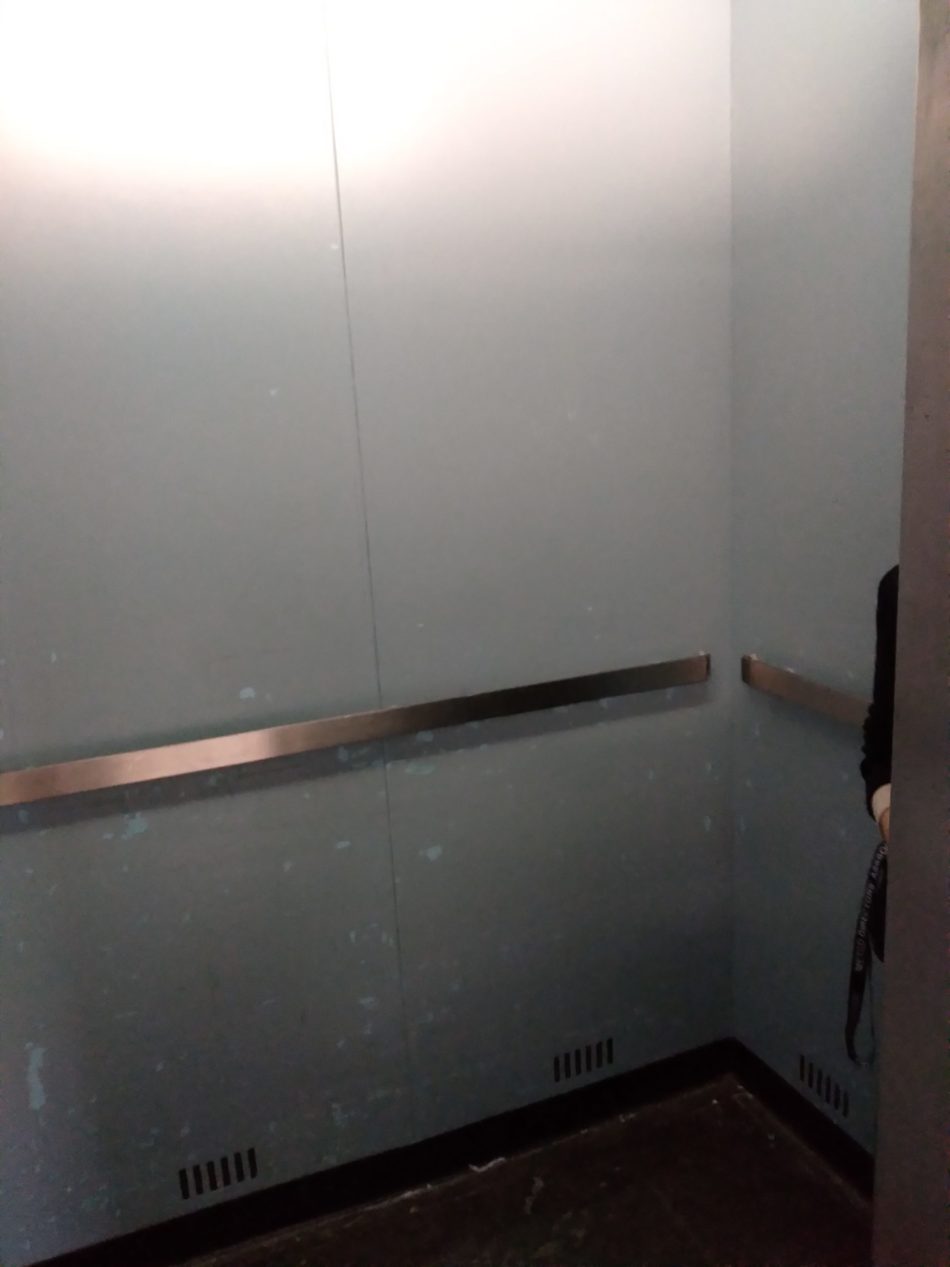 AN ELEVATOR was one of the areas shown at the High School tours last Saturday. (Neil Zolot Photo)

A visit to the infamous “crash corner” was on the tour. It is a two-door wide passageway connecting the 1960 section of the building to the 1972 side that almost everyone has to go through. MacDonald said many teachers are understanding when students are late for class, knowing how long it can take to traverse the building.

Many of these points were reiterated in the Q & A. “We’re seeking to improve accessibility and safety and educational and extracurricular activities to address accreditation issues,” School Superintendent Doug Lyons said, referring to a New England Association of Schools and Colleges study that gave the school high marks for “teaching and learning” and its students’ sense of community and student involvement, but “deficits about the physical plant.”

Science Dept. Coordinator John Hanron, Library Media Specialist Diana Ho and English Dept. 5-12 Coordinator Margaret Messier all testified about the lack of space for diversified learning in their areas. Lyons added that student counseling and support areas do not accommodate the way things are done today.

He also pointed out what won’t be covered by the MSBA, including extra sports and performing arts spaces. The black box theatre will be replaced by a full size auditorium, like the one at Galvin Middle School, that can also be used for plays.

In material repeated from previous meetings, including the School Committee meeting January 10, Town Administrator Steve Maio (WMHS Class of 1980) went over some of the tax implications of approval, including pointing out a gradual borrowing plan would be phased in to minimize costs. “We won’t go to a full tax increase until we’re well into the project,” he said. “We don’t want to pay interest on money we’re not using.”

Permanent Building Committee chair Joseph Bertrand again went over the timeline and the cost of alternatives, $178 million for an upgrade which would update systems and some physical elements but not change the structure of the building and $272 million for a renovation, only $1 million less than the cost of a new building anyway.

In further remarks, Maio outlined “the cost of doing nothing,” which include the need to upgrade the building piece by piece, a time lag to apply to the MSBA for the project again and a loss of NEASC accreditation, which will affect students’ ability to get into college.

“It could be a decade before we get back in the process,” Lyons agreed.

“If this doesn’t pass, it could be a long time before we get in line with the MSBA,” Bertrand added.

Lynn Stapleton, of Owner’s Project Manager LeftField, thinks the cost of the project could rise 5% per year if it has to be done later.

There was some pushback, however. Joe Tavano, WMHS Class of 1984, said he felt the heat on but saw open windows, which he sees as an “irresponsible use of taxpayer dollars.”

He also said the cost is a quarter of a billion dollars, pointing out, “That’s a lot of money.”

He also feels the “building isn’t that bad. I’d like new schools but also new roads and parks” and threatening a loss of accreditation is an intimidating ploy.

He also wondered if money couldn’t be saved by sharing some High School functions with other schools, like Galvin, which has a large auditorium.

He also questioned the need for a white roof instead of a black one, a white roof attracting less heat than a black one and allowing for more efficient cooling. “We’re not in Texas,” he said. “We have more cool days than hot days,” suggesting more insulation if necessary.

Brian Black, of architecture firm Symmes Maini McKee Associates, answered the building will have an intelligent cooling system that will monitor temperatures in different places. He also said too much insulation is ineffective. 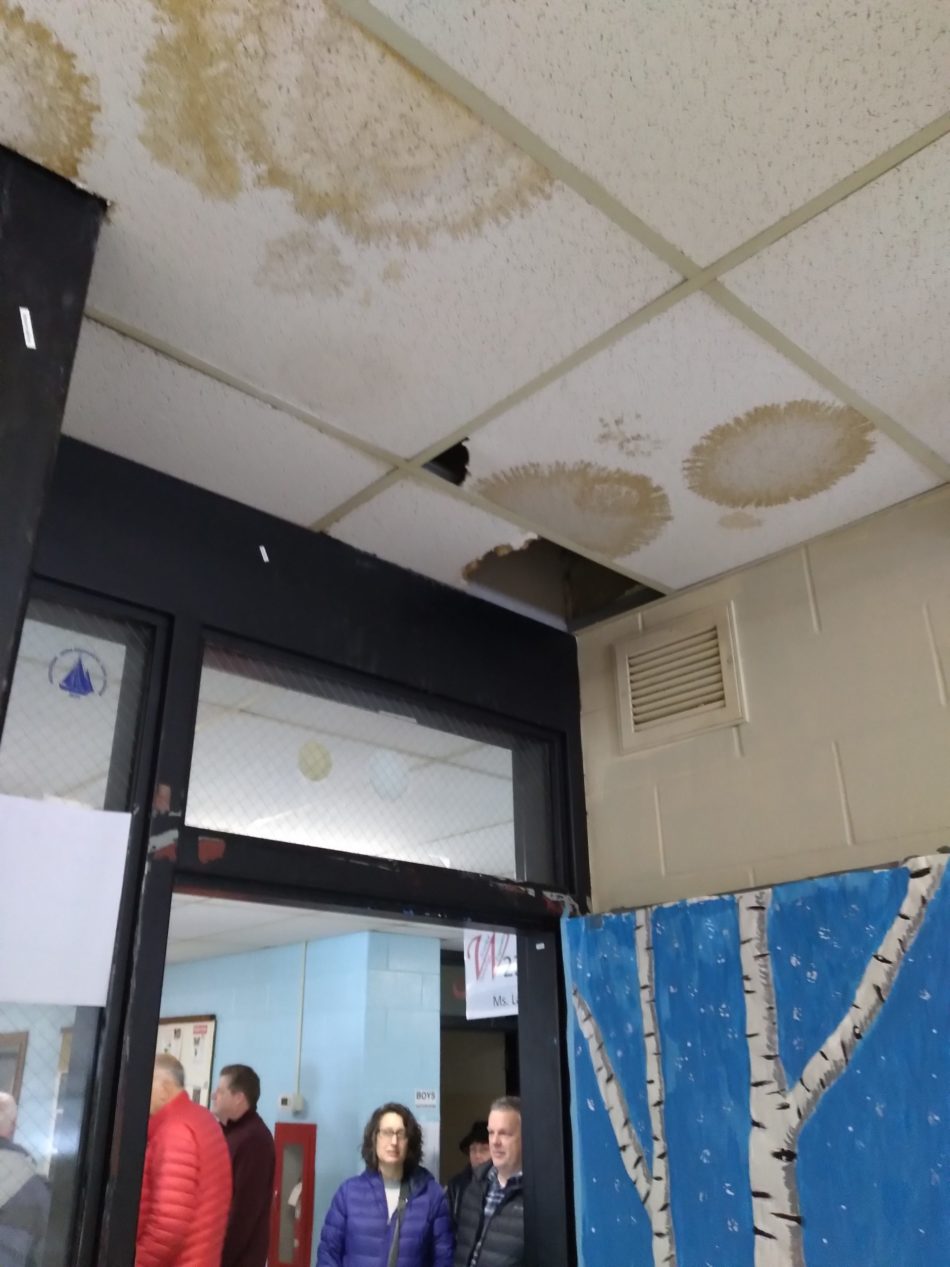 O’Brien said the building will need a full roof replacement if a new school is not approved and he and his staff are constantly having to make small repairs.

Tavano also said he’d like to see the state’s share of the project increase, an increase which did happen when the MSBA increased it’s the per square foot cost of the project aid from $360 to $393 to decrease the town’s burden by $5 million after lobbying by State Senator Jason Lewis and Representative Kate Lipper-Garabedian.

“It’s inequitable shifting the burden to the towns, but it is what it is,” Andrew Bray of Yes for WMHS reacted. “The system is broken but the building won’t be cheaper later.”

Resident Eileen Worthley asked why the school couldn’t be renovated by moving walls around. O’Brien answered renovation totaling 30% of the building will trigger requirements for full code upgrades.

Worthley also asked if “state of the art” and “college level” facilities are required and if all the furniture was going to be replaced. “Could that be cut back?” she wants to know.

“I wouldn’t call it fancy,” Bertrand answered about new equipment.

Lyons added, “The project is not to outfit every space with everything new.”