Football team gets a favorable result against Stoneham 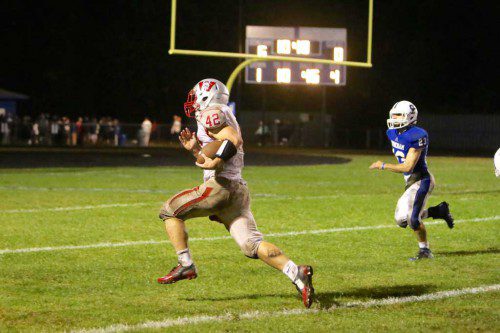 PAUL McGUNIGLE, a senior running back (#42), outraces Stoneham DB Brendan O’Neil (#23) to the end zone on a 30 yard touchdown run. McGunigle also added the extra point as the Warriors prevailed by a 7-6 score for their first win of the season. (Donna Larsson File Photo)

STONEHAM — There were a number of factors that favored the Stoneham High football team on Friday night at Stoneham High School. First the rain was 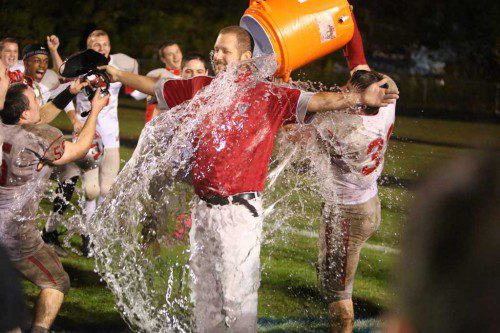 But the Warriors won the turnover battle and that wound up being the difference as Wakefield prevailed by a 7-6 score for its first victory of the 2015 season and the first for new head coach Steve Cummings.

Wakefield increased its overall record to 1-4 on the season and 1-2 in the Middlesex League Freedom division while Stoneham dropped to 3-2 overall and 2-1 in the division.

Stoneham outgained Wakefield in total yards, 288-196, and ran 21 more offensive plays than the Warriors. But the Spartans also fumbled five times, losing four of them while Wakefield turned the ball over just once. That wound up being the difference as Wakefield was able to squeak out the one point win.

“It was nice to get the ball to bounce our way for a change,” said Cummings. “We made a few of our own breaks by stripping the football. (Evan) Taylor is a great back but we noticed on film that he reaches out with the football. So we told the guys to try and strip him of the ball. He’s a very good back and should keep his head up.”

Taylor was the workhorse for the Spartans carrying the ball 37 times for 187 yards which the majority of Stoneham’s 199 yards on the ground and he carried the ball all but eight times for the Spartans. Taylor also fumbled four times, losing three of them.

Wakefield’s leading rusher was senior RB Paul McGunigle who gained 79 yards on 15 carries and scored the lone Warrior touchdown on a 30 yard run at the beginning of the fourth quarter. McGunigle also made the crucial PAT which wound up being the margin of victory.

“Paul McGunigle had a nice run and Mike Moran made a huge block down sideline to spring him,” said Cummings. “We also had good special teams (on the PAT). They’re (Stoneham) a good football team and we just kept grinding. We’ve been on the wrong side with the turnovers, so it was nice to see it go our way. It’s good to get a win and continue our playoff quest.”

Wakefield couldn’t breathe easy until time had run down as the Spartans attempted a 37 yard field goal on the final play of the game. Dan Sweet’s kick was way short of the mark as Wakefield celebrated its initial win of the year.

Defensively, the Warriors got great efforts from Moran and Zack Kane, both linebackers, as each had 10 tackles. Alex McKenna, a junior DB, had eight tackles and a fumble recovery. Also junior LB Joe Marinaccio had quite a game for himself with five tackles and two fumble recoveries. Junior lineman Tom Hayes also recovered a fumble.

Wakefield received the ball first and McKenna caught a 30 yard pass on first down to bring the ball into Spartan territory. Wakefield got as far as the Stoneham 41 before punting the ball away on fourth down.

Taylor ran for 10 yards on a fourth down and one play from the Stoneham 29 to move the chains but on the next play senior QB Brandon Cann fumbled the football after a three yard gain with McKenna recovering at the Stoneham 42.

Stoneham then sustained a 17 play drive as it moved the ball down to the Warrior 17. Taylor did most of the work as he had 14 of the carries. Taylor had runs of two, four, nine and eight yards to pick up first downs. Also Cann completed a 15 yard pass to junior TE Tim Russell on a third down and 12 play to keep the drive going. Senior FB Rich Colarusso had a three yard run as well. But after Taylor slipped and was tackled for a three yard loss on a third down and two play from the Wakefield 17, Cann’s fourth down pass was incomplete as Wakefield took over on downs with 4:06 left in the second quarter.

The Warriors went three and out and the Spartans took over at their own 45 with 2:10 left in the half. Stoneham needed six plays to get into the end zone. After an incompletion and a six yard run by Colarusso, Cann completed a five yard pass to sophomore WR Adrian Sousa to move the chains. Taylor then broke a 29 yard run to bring the ball down to the Warrior 15. Taylor then gained three yards on first down. On second down and seven from the Wakefield 12, Cann found Russell on the left side of the end zone for the TD with 58 seconds in the half.

But Sweet missed the extra point as Stoneham led by a 6-0 score.

The Warriors moved the ball into Stoneham territory in the final seconds as McKenna caught a pair of 16 yard passes. But on first down and 10 from the Spartan 28, Nadeau was intercepted by DB Brendan O’Neil on the final play of the first half.

Stoneham received the second half kickoff and began its first series of downs of the third quarter from their own 35. The Spartans held the ball for 10 plays and brought the ball as far as the Wakefield 26. Taylor had runs of nine, seven and three yards for first downs. Taylor also fumbled on one play but got the loose ball which helped slow down the Spartans’ momentum. Stoneham eventually gave up the ball on downs as Taylor slipped on a fourth down play and was tackled for a one yard loss by McKenna.

“Stoneham has a big line and they like to run behind 72 and 75 (Dan Hudson and Jacob Souza),” said Cummings. “Our defense had a couple of big stops. In the second half our kids just kept fighting.”

Wakefield had a holding penalty on first down as it eventually punted the ball back to the Spartans. A personal foul penalty on a fair catch resulted in Stoneham starting its next possession at the Warrior 40.

Taylor had runs of three and seven yards before losing the football with Marinaccio recovering the fumble at the Wakefield 25. Wakefield capitalized with its only TD of the game as it mounted a five play scoring drive. Two Spartan penalties aided the Warrior cause as well.

Senior RB Kevin Russo gained three yards and McGunigle ripped off a 12 yard run. Russo ran for five yards and McGunigle gained four yards setting up a third down and one play as the third quarter ended. On the first two plays of the fourth quarter, Stoneham jumped offside and then had a pass interference infraction as the Warriors had a first down at the Spartan 30. McGunigle broke his 30 yard TD jaunt and scored with 10:43 left in the fourth quarter.

McGunigle added the crucial PAT to give the Warriors a 7-6 lead.

Stoneham started its next series at its own 43. Sousa caught an eight yard pass for a first down. But Cann slipped to the ground two plays later for a seven yard loss and then Taylor ran for 11 yards but also also lost the football as Marinaccio recovered it at the Warrior 45.

Wakefield had a delay of game penalty and a spot holding penalty which hurt as McGunigle had runs of eight, six, six and two yards setting up a fourth down and three from the Spartan 48. Wakefield attempted a fake punt but Alex Jancsy was tackled for a two yard loss as Stoneham took over at midfield.

“The fake punt from about the 50 was in our game plan,” said Cummings. “If the situation came up we were taking our shot. The players said, ‘let’s go for it’. It just didn’t work out.”

Stoneham picked up a pair of first downs, one being a 12 yard reception by junior TE Devon Chase on a fourth down and seven play. The other came on a 19 yard run by Taylor. But on first down and 10 from the Warrior 14, a holding penalty pushed the Spartans into long yardage. After an incompletion and no gain by Cann, Taylor caught a nine yard pass. But on the play, Taylor lost the football with Hayes recovering at the Wakefield 16 with 1:09 left.

After a pair of runs by McGunigle went nowhere, Wakefield went for the first down with Nadeau attempting a pass to McKenna down the field. But despite being open and a perfect pass from Nadeau, McKenna was unable to haul in the ball as Wakefield punted the ball away to give the Spartans one last chance with 34 seconds left.

From the Warrior 45, Cann had three straight incompletions before find Chase with a 25 yard pass on fourth down to bring the ball down to the 20. Cann then spiked the ball and Stoneham brought on the field goal unit to try and win the game on the final play. But Sweet’s kick was no good and the Warriors prevailed by the slimmest of margins.