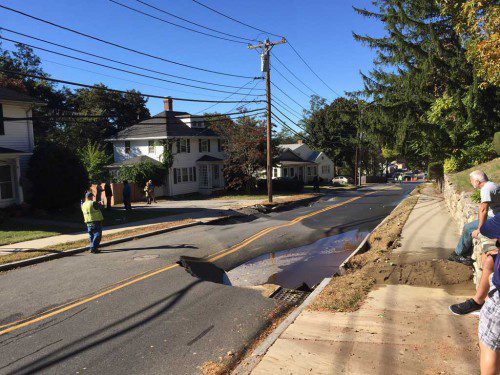 WAKEFIELD — Water cascaded down Green Street Saturday afternoon, flowing onto nearby properties and into basements after a major water main let go near Dillaway Street sometime around 2 p.m.

The main, at least 16 inches in diameter, carries a tremendous amount of water. When a section of it let go, part of Green Street buckled and opened up. Homeowners, particularly those on Main Street on the Crystal Lake side of the Green Street intersection, had water in their yards. Some had water in their basements. Retaining walls in the area also were compromised by the water.

Up on Dillaway Street, service was shut off to the large water tank at the top of the hill. For a while this weekend, fire officials were concerned about getting water up the hill if needed. Thankfully, it wasn’t.

On Sunday morning around 5:15 a.m., Main Street was open to fire apparatus. Motorists were unable to use Main Street between Charles and Oak until last night, according to police. Green Street was compromised during the break and needed to be repaired. Police were notified of a “heavy water flow” down Dillaway Street around 1:40 p.m. Water service in the area had to be turned off while the main was fixed.