Football team gets ready for another gridiron sequel 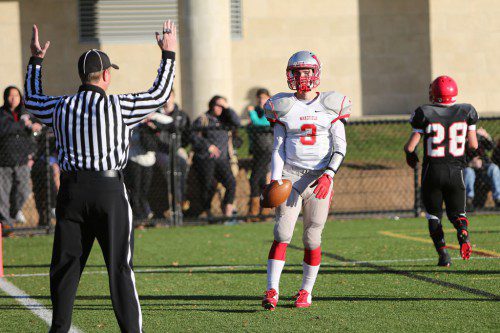 SENIOR WR Brian Dickey (#3) caught a 19 yard pass for Wakefield’s first score of the Winchester game as the official signals a touchdown. The Warriors are hoping for a winning result when they host Burlington tomorrow night at Landrigan Field. (Donna Larsson File Photo)

WAKEFIELD — Another rematch is on tap for the Wakefield Memorial High football team and given what happened in the original regular season meeting, the Warriors might not mind another gridiron sequel.

The Warriors enter the game with a 4-5 overall record having lost two games in a row. Wakefield, the sixth-seeded team in Div. 3 Northwest, lost its quarterfinal contest against Melrose by a 24-0 score and its first consolation bracket game last Saturday against Winchester by a 30-26 tally. In fact, Wakefield’s last victory was against the Red Devils on Oct. 24 as it routed Burlington, 35-14.

Burlington (2-7) lost its quarterfinal playoff game against Concord-Carlisle, 21-0, and then was denied by Wayland, 26-13, in the first round of the consolation bracket. The Red Devils were the eighth-ranked team in the Div. 3 Northwest sectional playoff.

This is the second time the Warriors are playing a team they also played in the regular season. The first was against M.L. Freedom division rival Melrose and the result of the rematch was quite a contrast to the original game. Wakefield also faces Melrose on Thanksgiving for a third and final meeting in the 2014 season.

This time, the Warriors are hoping that the sequel is as good as the original if not better. Wakefield also hosts Burlington for the second time this season. The Warriors were 3-1 at Landrigan Field and won three straight games to end the regular season. Their last two setbacks came on the road.

Burlington and Melrose are the two M.L. teams that play in Wakefield’s tier of the league, so playoff and consolation match-ups against both teams seemed to be inevitable and will be as long as this current playoff system is in place.

M.L. Liberty division rivals Arlington, Belmont, Winchester and Woburn are also among the 11 schools in Div. 3 Northwest. So playing a M.L. team in the postseason is also a very strong possibility each year.

“It’s another unusual match-up against a team we have already played once,” said Head Coach Mike Boyages. “It’s good that we don’t have to travel. We also played one of our better games this season against them. We were also healthy at the time but have suffered a number of injuries since.”

In the first meeting, Wakefield outgained Burlington slightly in total yards, 246-230. But the Warriors made the big plays to get into the end zone that night.

Leading the way offensively for the Warriors on Oct. 24 was senior QB Anthony Cecere who completed eight of 13 passes for 119 yards and three touchdowns. Cecere also rushed for one touchdown and was the leading rusher with 36 yards on eight carries.

Senior RB Luke Martin caught two of Cecere’s touchdown passes and had three catches for 48 yards. Martin, who rushed for 35 yards on 10 carries, also scored one touchdown on the ground as well. However, Martin didn’t play last week against Winchester and it is unlikely he will return tomorrow night.

Defensively, junior DB Tighe Beck led the way with 12 tackles while junior LB Mike Moran had six tackles and senior LB Jack Brown had five stops. Junior lineman Logan Dunn and senior lineman Brian Conroy each had a sack and Martin had an interception. The Warrior defense bent in terms of total yards but kept the Red Devils off the scoreboard most of the time to prevail.

“We struggled out of the gate against Winchester. We played a good second half,” said Boyages. “The kids are working hard and we’re working to put together four good quarters.

“We also miss Luke (Martin). He does so much for us and that has forced us to adjust our game without him,” continued Boyages. “Zach Kane has been cleared to play. We’ve missed him especially on defense where he plays a lot of linebacker for us. It’s been tough.”

On Oct. 24, junior halfback Chenet Guerrier gained 139 yards on 25 carries and one scored one touchdown on the ground to lead the way for Burlington. Guerrier also made one reception with a 20 yard TD catch three weeks ago.

Sophomore QB Dylan Bonfilio completed seven of 12 passes completed for 66 yards and a touchdown. He was also intercepted once in the regular season meeting.

“Burlington has struggled this year,” said Boyages. “They can score points but the defense has been their Achilles’ heel. They are a young team and they’re getting better and better every week. They’re going to be a solid team next year and I’m sure they’re looking to gain some momentum headed into next season.”

The Warriors are looking forward to an extra home game and finishing up the 2014 season with two straight contests at Landrigan Field.

“It will be nice to have two more home games for the seniors,” said Boyages. “We have a lot of seniors and we would like to get a win before the long break. We usually gives the kids some time off with the long layoff before Thanksgiving.”